After her hit success in the eighties Kim Wilde fell into a deep depression. For her new cd 'Love is' she has, like she says herself, 'had to get myself together again, a slow and painful process...'

It's as if she's never been away. The Kim Wilde sitting right across from me, looks exactly like I left her years ago in a forgotten record rack: the Kim from 'Kids in America', 'Chequered Love' and 'Love Blonde'. after the successful offensive on the charts she has left my thoughts and the ether, strange enough. From the dead age I remember vaguely hits like 'You Came' and 'Never Trust A Stranger'. But really convince me she couldn't, the Kim Wilde of that time - in a slightly fatter, diva-ish version that I and probably she liked.
And now she's sitting there in front of me, a flashback from the early eighties: a black hairband and her blonde coloured hairs, a black small pair of trousers around her slim waist, the familiar black lined eyes, the slightly nasal voice...
"In fact between my resting period and now there are striking similarities", she says when I make that comment. "Take my clothes for instance: I wear an old jackets from my father, for my very first vdeo I also wore one of his jackets. Between my first album and 'Love is' there are similarities as well. In both albums we played with more live musicians than in all the albums in between. But most of all I have regained the self-confidence I had then.

Did you lose it then?
All those years I lived in London, I never felt bad about it. When I moved back to the countryside a couple of years ago it made a world of difference. In fact I'm a country girl - I want to smell the grass when I get out of bed, you know? That move coincided with the most depressing period in my life. I'd made an album that fully flopped, my relationship ended, I was very unhappy. I drank and ate too much, gained weight, looked bad and felt bad. For 'Love is' I have gathered myself together: a slow and painful process.

Strange how a passion, the music, can make you so unhappy...
My music didn't have a lot to do with it. It was my career itself, because it always consisted of ups and downs - very hard to deal with. But I was so disappointed in fame and the whole music world, especially after I was Michael Jackson's support act. The fact tht I only met Michael during the press conference says it all. In this world fame is taken so seriously! The problem was in me, of course. I felt lost and confused. I got up and didn't see the use of a new day. I just wanted to sleep. In fact there was a certain dissatisfaction within me, and it culminated through a combination of circumstances in a deep depression that lasted for months. I even throught of ending my career.

How did you get out of that depression?
One day I had to acknowledge the fact that things weren't going so well with me. I decided to lose weight, to work on myself, and because I succeeded and because I could make the cd I always wanted to make, I got courage and energy again. Ialso have to thank my new boyfriend. I've known him for eighteen months now. No, you don't know him - he works in the car industry. He is a good man with a golden heart. He was fantastic during my crisis. He didn't understand it at all, but still supported me enormously. He's the one who phoned me out of bed and started me writing. He dragged me through it.

Do you find faults with the old Kim Wilde?
No, I am just a happier version of who I used to be. The emptiness I felt is now filled with good, pleasant things. Trust, optimism. I am more relaxed than I used to be, less impulsive, stronger, as if I can do everything now. The audience will also discover a new Kim Wilde, visually and musically. I am so happy that my brother Ricki worked with me on 'Love is' in the end. After the previous flop he lost his confidence, which made him want to stay out of the way for this project. Fortunately he changed his mind. And now that I finally have a hit again, he's over the moon." 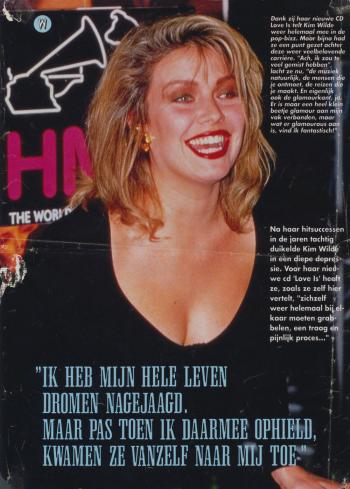 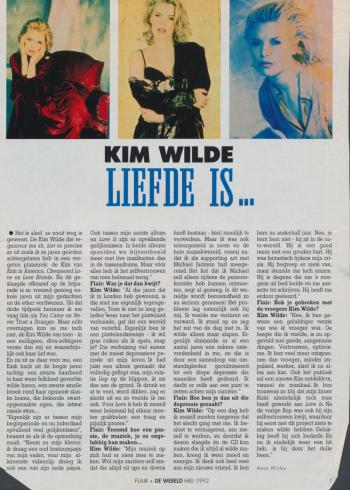