Date
1 August 1992
Published in
Popcorn (Poland)
Kim Wilde (really Kim Smith, born on November 18, 1960 in Chiswick, England) is one of the few foreign stars who liked to perform in Poland. The singer performed twice at the festival in Sopot: in 1988 and 1992. This year's single "Love Is Holy" contributed to her return to the charts. It is possible that the new album "Love Is", whose official, non-pirate version was also released in Poland, will achieve similar success.
Kim was born in an extremely musical family. Her mother Joyce performed in the fifties and sixties in the girl group Vernons, and Dad - Marty gained considerable popularity in Great Britain as a performer of the hits Elvis and other American rock'n'roll stars. Marty really wanted Kim's brother Ricky to follow in his footsteps. However, he was against Kim's career as a singer. Fortunately, the siblings were not worried about their father's bans. Ricky and Kim recorded several demo bands and sent them to the producers. One of them liked the song "Kids In America", which he released on a single in 1981. This album has already brought her success on the charts in England, and later in the USA. Then the next hits hit: "Chequered Love", "View From A Bridge", rework of the old hit The Supremes 'You Keep Me Hangin' On"," Never Trust A Stranger" and many others.
In 1988, Kim opened concerts during the Michael Jackson European tour. It was also then that her Polish fans met her for the first time. Kim was delighted with the reception that prepared her audience in Sopot. "I am looking forward to my second trip to Poland," Kim admits. No wonder that she immediately accepted the invitation from the organizers of this year's Sopot. And this time her performance ended with a standing ovation. So no one should be surprised when Kim visits our country again.

Readers who sent us a post neck with the note "Kim Wilde" will take part in the draw of cassette tapes, sponsored by Bass records. 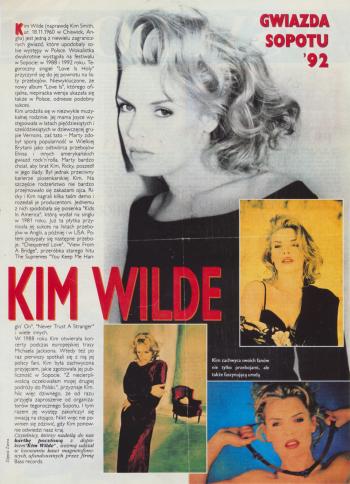