Hallelujah! She is back, the beautiful Kim Wilde. Love is Holy, her new single is conquering the whole of Europe and there is a lot to say that the beautiful of London is on the way to prance once again at the top of the tops. Such a cute character was well worth the detour. So, just for you, 7 Extra went to meet him.

Back in the spotlight...
Yes. Love Is Holy was released a few weeks ago and is already very well ranked in England. It's very exciting because we have been working on the album 'Love Is', from which it is extracted, since February 1991.

For this album, you do much more than sing...
Indeed, I co-wrote almost all the songs and we worked a lot, especially on the writing because I admit that the previous album ('Love Moves') had some errors that we did not want to reproduce anymore.

Which ones?
We made songs maybe a little too commercial, too 'dance', which took me away from my usual style. Love Is Holy is a return to more conventional, more acoustic songs. It is more natural, while being very worked. I think this record is one of maturity, consistency and confidence. It's an 'optimistic' album because when we started writing, we knew we were going to do a good job. We were very motivated to fix the mistakes of the previous one and to prove what we were capable of.

Do you think it contains good songs for the scene?
Yes, by the way all of my songs are pretty cool to play live. Titles like You Came or even Kids in America have a very rock influence which sounds good in concert. I would say that my music is oriented towards a mixture of rock and soul, that is to say a good cocktail for the scene.

What has changed between Kim Wilde from Kids in America and that of 1992?
The biggest development is the confidence I slowly gained in my possibilities. Now I write the songs, before, they were composed by my brother and my father, which was a little frustrating for me. I listened to my idols like Stevie Wonder or Simon & Garfunkel and I wondered how they managed to compose such beautiful songs. So, instead of contemplating them with envy, I too started to try to create, and it didn't go too badly.

What if it hadn't been?
I don't think I would have kept enough motivation to continue to do this job. I would not have been involved enough and my career would have ended slowly. I am much happier now because I feel my songs better and I trust them.

What was the trigger for you to start writing?
I didn't think I was ripe enough to take the pen but my brother wrote hits while being younger than me. This observation made me want to get started. It took a little time, I had to write lots of songs before I got some convincing but it didn't matter to me: I reached my goal and I am really delighted. You know, just for this album, I wrote about 60 songs and we took three above ...

During Michael Jackson's famous tour, what were your relationships with him?
I haven't had any! I was waiting for him to take the initiative and come to me, but he never did. I was not angry with this attitude since he is like that with everyone.

You seem a little shy...
Yes and no: it depends on whom I address. Basically, I am not, but I like to keep a few little secrets about my real personality. I don't like feeling overwhelmed or analyzed.

Are you going on vacation this summer?
No, I will devote all my time to promotion. In winter I ski in Switzerland but when I have a moment, I like to be alone at home, in the north of London. I miss my house. It's very quiet and being there allows me to get my ideas in place.

How do you manage to stay so pretty?
Wow! I gained a lot of weight a few months ago, but I knew that the album I was preparing would be very valid. I wanted my physique to be too, so I did a lot of sport and I even learned to ride a horse! Otherwise, I hardly drink, I don't smoke, I eat everything and I feel very good like that.

Basically, who is Kim Wilde?
Oh! I would say that he is an accessible person, a kind of anti-star because that is what I really am. Let's say that I am someone with whom contact is possible. 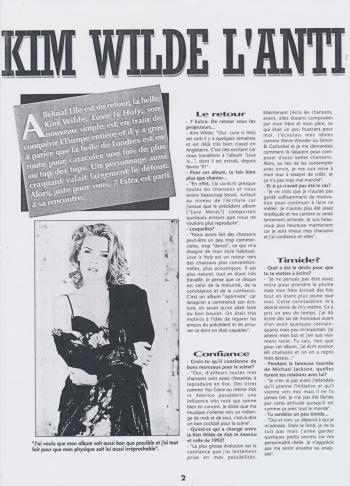 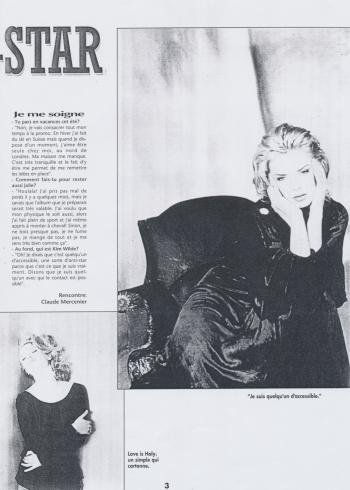