Kim Wilde is totally back in popbiz. She's out of her 'dip', and anyone can hear it. Maybe her new CD "Love is" is the best one in her career. It's clear: Kim enjoys singing and performing again. She is a guest in the TROS water-spectacular "Tobbedansen" ("Tubdancing"), Friday night July 3rd, TV2.

The last few years it didn't go well with the beautiful blonde English singer, who is discovered by accident in the early eighties because she sings backing vocals for her father and brother. When the record company bigwig hears - and of course sees - her the sexy Kim gets the rol of lead vocalist instead of backing vocalist. Assisted by brother Ricky (music) and father Marty (lyrics) the hit machine works full speed and La Wilde hits bulls eye in all European charts. Besides her good looks Kim has a typical voice with a nasal sound that leads some people to believe that she has a chronic throat infection but others perceive it as very sexy. Either way, with her beautiful voice Kim scores hit after hit: "Kids in America", "Chequered love", "Cambodia", "View from a bridge", "Child come away" and "Love Blonde". But the past few years Kims career started to fare less well. Competition, singles that failed to reach the upper half of the charts and also the constant changes of musical style led to CD's that were neither fish nor flesh. The number one hit in America, a cover of "You keep me hangin' on", gets her out of trouble for a while and she successfully joins Michael Jackson on tour. But this can not prevent "Love moves" from becoming a failure.
"After the tour with Michael Jackson I landed into a big 'dip'. The tour was over, ik had relationship troubles and my record failed. I ate, drank and life totally passed me by", says Kim. With the help of a friend she managed to beat this and started to become interested in recording a new album again. That record, "Love is", showcases an artist reborn. Kim Wilde has grown from a clinical Barbie doll without an identity to a mature singer. She's taken years to arrive where she is now, receiving a few emotional beatings. Not only her depression after the Michael Jackson tour, but also many desastrously ended relationships.

"Just like so many women in this business I often meet men who have a successful career that comes first in their lives, which is not a formula for a good relationship. I'm not ready to trade in my own career for a marriage license and diapers myself. With every new relationship that comes along, there's this big obstacle. Still, my life is defined by love. Not only the love between a man and a women, but spiritually: friendship and fidelity. That's what my single "Love is holy" is about. 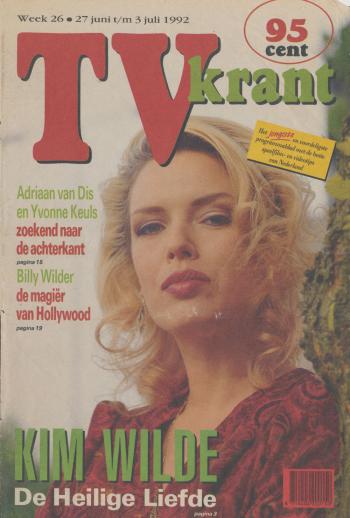 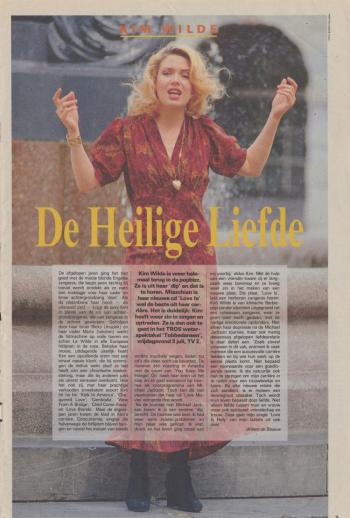