Kim Wilde, the beautiful English woman, returns after three years of absence with Love is, a very dance-music album, in the air of time, very 2000. The theme is, as its title indicates, love.
To each of us, to add, according to his experiences, a sequel or an end to this multi-faceted word.
For the muse of Laurent Voulzy, the love is conjugated in family so it is true that once again, it is the album of the clan Kim Wilde. All of them participated: Mom like manager, dad, rock star of the sixties, as producer of his daughter, Ricky who wrote practically all the songs of his sister and finally Roxanne, twelve years, who made the chorus in particular for the title High Of the moon. Kim readily admits that the youngest of the family 'has a wonderful voice'.

The thirties just passed, the singer returns with success. Forgotten the difficult time or inspiration had left her, or she doubted everything.
She attributes this renewal to the fact that she left London to settle in the countryside. "Far from the capital and its atmosphere, I felt reborn" she said.
Talent would be a mere question of air! Kim, who knows the music, says it and can be trusted. 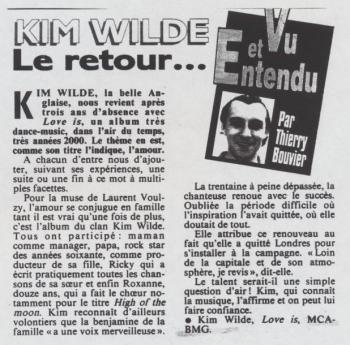