Who remembers Kim Wilde? Not all at once! British Kim was once an absolute world star: she scored one hit after another and no boys room was complete without a poster of Kim on the wall. That time has passed, unfortunately. The singer had one hit in 1989 and then it became silent. It's the quiet before the storm, because this week her new single 'Love Is Holy' is released, prefacing her new album 'Love Is'. Kim Wilde is back! This week we look into her photo album...

1. Kim is really called Kim Smith. She is born on November 18, 1960. Her father Marty Wilde is also in the business. In England he was world famous in the early sixties with hits like 'Donna', 'Teenager in love' and 'Abergavenny'. Kim can be heard as backing vocalist on his albums. In 1980 she is discovered by record producer Mickie Most. He launches Kim as 'the new face of the eighties'. Father Marty and brother Ricky Wilde write the songs for Kim's first album, released in '81. With hits like 'Kids in America' and 'Chequered love' Kim is soon a real pop idol. All the boys love her luscious lips.

2. Kim's 'Cambodia' is awarded during the Brits Awards as 'Best popsingle of the year' (sic; Kim was 'Best female singer' - Wilde Life) On this cosy picture you see all the award winners together: Vince Clarke (then in Yazoo), Michael Jackson (with his nose intact), Pete Townsend (The Who), Kid Creole (from The Coconuts), a pair of glasses (belonging to producer Trevor Horn), Paul McCartney, producer George Martin and a few other sirs we don't know; in front Alison Moyet (see Vince Clarke), Kim (you know) and Linda McCartney (see Paul McCartney).

3. A rare sight: Kim smiling! The sniger never smiled on photographs. That was a kind of trademark. Kim had a lot of reasons to smile, though: she was one of the most successful pop artists of the eighties.

4. Kim was good live too. In 1988 she toured in America (sic - WL) and in the years after that she was a regular support act for Michael Jackson and David Bowie.

6. A recent picture of Kim from '91 (sic; it's 1987 - WL) shows that the singer has lost nothing of her charms. She is planning to be big again in the nineties. 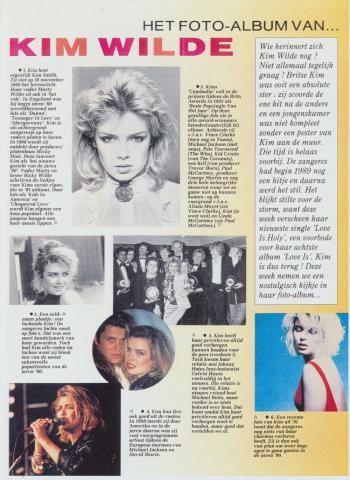