Kim's not too Wilde about the single life

Believe it or not, this glamorous British pop star spent her first night in Sydney all alone in her hotel room watching a video. Her new album is called LOve Is. But blonde singer Kim Wilde still hsn't filled in the end of that sentence.
At 31, the daughter of '50s pop idol Marty Wilde sas she would like to settle down and marry someone - if she could only meet the right person. Until then she contents herself with watching Steve Martin in Planes, Trains and Automobiles in her lonely room atop the Regent Hotel.
"Some people would say my musical career has ruined my personal life", she said yesterday during a round of interviews to promote her new album. "I'm married, in a way, to my career. But if the right person came along I wouldn't hesitate to include them in my life."
Jet lag woke her up at 5am yesterday, to her disgust - "I am the doormouse of rock. I hate waking up early."
After a workout in the hotel gym, she faxed a letter to her best friend in London. Wilde scored a worldwide smash hit at age 20 with the 1981 song Kids in America, followed by Cambodia and View from a Bridge.

You would think a glamorous pop star like Kim Wilde would have something better to do on her first night in Syndey than sit alone in her hotel room, watching a video. But that's exactly what the blonde 31-year-old UK singer did on Tuesday night. She watched Planes, Trains and Automobiles and fell asleep.
"Some people would say my musical career has ruined my personal life", she said yesterday. "I'm married, in a way, to my career. But I don't think that's a bad thing. If the right person came along I wouldn't hesitate to include them in my life."
During a day of back-to-back media interviews to promote her new album, Love Is, in her 32nd-floor Regent Hotel room overlooking Sydney Harbour, Wilde wore her heart on her sleeve - almost literally.
Attached to her pink and green chiffon blouse was a large silver heart-shaped clasp. Shoulder-length blonde hair in a Bardot bun, silver rings on her fingers, and dressed in black from her jacket to her toursers and suede boots, she had begun the day with a workout at the Regent's in-house gym.
"This is the busiest day (of the tour). So the gym helps me relax and get the energy to cope."
She first came to Sydney when she was 12 and spent three weeks here in 1981 at the beginning of her music career, when she ate out at restaurants, boated on the harbour and went to the Opera House. This time, she's keeping to herself more.
On the street, people look at her without recognising her. After all, it was 11 years ago that Kids In America smashed to the top of pop charts worldwide, followed by Cambodia and View From a Bridge.
But then came an unhappy slide into obscurity for the daughter of '60s pop star Marty Wilde, punctuated only by the hit single remake of the Supremes' You Just Keep Me Hanging On in 1986.
And the woman who had rivalled Madonna, dated Adam Ant, been likened to Brigitte Bardot, who newspapers had labelled 'Sex Kitten', even became fat for a time.
"At the lowest point of my career, just prior to You Keep Me Hanging On, it was a difficult time and I was very vulnerable and the record company I was with, all of a sudden landed me with this Barbie Doll image where I wore very tight clothes and it started to feel very contrived, not me. I never considered myself to be an image person. You change your image as you grow older naturally, depending on fashion, and how you feel about yourself. I don't sit down at a table and think about my image. It's not a contrived thing. That's not to say it's completely haphazard, but my image is an extension of me. I can create an image in the Love Is Holy video which is not at all like the girl sitting here. It's very Marilyn Monroe, very glamorous, which is not me at all, except I suppose there's an aspect of that in every woman."
Wilde has the casual poise of someone comfortable with every aspect of the business she's in.
She has no illusions about the music industry because she saw it raw from backstage as a baby with mum Joyce and dad Marty.
"My dad was going to work when my best friend's dad was going to bed. But it was hard work, smoky dressing rooms, working men's clubs up and down the coast - it was quite a seedy scene in many ways. Backstage it was so dirty and horrible. Outside it's glamour and tinsel and my dad and the show goes on. But I never grew up seeing the tinsel and the lights. I grew up backstage with the sweaty socks. It was a realistic introduction."
Her music is a family business. Joyce is her personal manager, brother Ricki helps her write songs and Marty advises her.
"I count my parents among my best friends. They're the people in any major turning point in my life I'd confide in and consult. I don't want to be out there still shaking my thing when I'm 40. I'd rather write the songs and let someone else do that. I love song-writing. It's like making a little baby - making something from nothing. You have to go through a period of going nowhere but it's the same for most people. Even the wife at home making the dinner might have to throw it out until she gets it right." 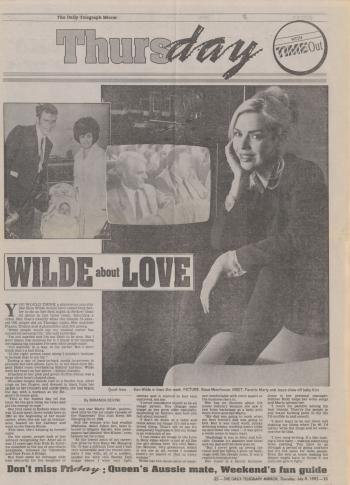