London (BA): Kim Wilde is back. At 31 years old, she has gotten rid of both worries and excess pounds. "I've had a terrible time," she says. But her new album has optimistic and positive tones. Just the way she feels.

Four years ago, Kim Wilde reached her preliminary musical highlight when she was a warm-up artist for Michael Jackson at Wembley Stadium. Over 70,000 people gave her almost the same response as the main artist herself, and her career seemed to float on a wave of successes. But quite quickly she encountered hardship.

Towards the end of the 1980s, her single discs suddenly stopped selling. Combined with the break-up with her longtime friend Calvin Hayes from the band Johnny Hates Jazz, Kim Wilde lost both confidence and the ability to produce new hits.

I never leaned back and did not notice its success. From the outside, it sure looked like I was having a great time. But the truth was that I was constantly walking around and was scared that it would all end, she says.

What appeared to be a charming live was really marked by personal problems and loneliness. Today, the artist who came on the hit lists with "Kids From America" ​​is exceptionally honest in her description of how her sequels were in the 80s.

- I lacked complete self-confidence, which created many problems, she says.
She tried to master her changing humor with harder times than many meals. The result was that the weight increased and the once-famous Wilde figure became rounder at the edges. But look at her now. Not only is she in better shape, but she has also completed one of her best records in many years on "Love Is Holy".

- I feel in great shape. I started a training program some time ago and it has had an incredible effect on me, she says.

Moved out of London

Perhaps it is also somewhat related to the fact that Kim Wilde - daughter of 50-year-old star Marty Wilde - has moved out of London and settled in her childhood village an hour's drive north of the capital. Today, at least she can laugh a little from the artist industry she is part of.
- In the past, I lived in many ways as a street singer without thinking of anything in the future. That's why a lot went up and down. Success one moment and trouble the next. I didn't think I was having any fun, she says.

Kim Wilde eventually realized that she had to do something, and today she thrives with her former schoolmates north of London. She has kept in touch with many of them and therefore does not miss London.
At her home, she also has her own studio, and her last record is halfway through a family production. Her brother Ricki has produced it.

- I enjoy living here much better than in London, and living a much healthier life than I did a few years ago, says Kim Wilde. 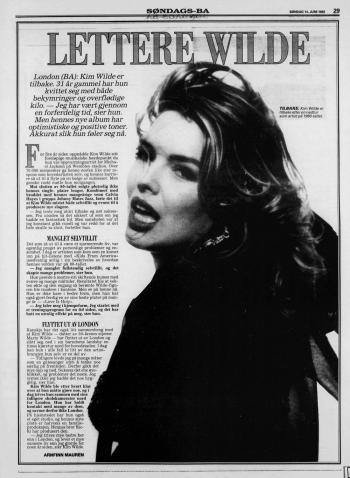