[Translated for Wilde Life by Derek]

Kim Wilde has always made her French fans fantasize about her. Laurent Voulzy himself even dedicated a song to her, Mes Nuits Sans Kim Wilde! But Kim isn't just a sex bomb, she's also a woman who is very family-orientated.

Why did you dedicate your last album (Love Is) to the subject of love?
Actually, love always inspires me. It's a subject which is constantly renewing itself. Each one of my 'love affairs' is an opportunity to write a song!

For some tracks, you called upon a new producer, Rick Nowells, who has worked a lot with Belinda Carlisle.
In the mid 80's it was very fashionable to work with a successful producer. At one time, the producer became more important than the artist or the person who wrote the song. It was completely mad! I preferred to stay away from all of that. I didn't want my albums to have somebody else's sound. So as a result, I only worked with my brother. But we both wanted to try something different. The American producer Rick Nowells made us an offer. He came to see us in England whilst we were already recording. In less than half an hour, we decided to do a few tracks together.

What did he bring to the table?
He gave me confidence. Apart form my brother, I'd never seen anybody so concerned about what I was doing. Also, we recorded everything live in the studio with all the musicians. That had never happened before.

Wasn't your brother Ricky also a singer?
Absolutely. And besides that, he also takes part in backing vocals today. Ricky started his career very, very young. What's funny is, he used to invite me to do backing vocals on his own tracks - I must have been no more than 12!

The same age as Roxanne, your sister, who sings on your latest album?
Yes. She's adorable! She's like I was when I was her age. She really wants to grab hold of life. But she's so shy..

It's your father, Marty Wilde, a 50's rock star, who helped you to get started. We get the impression you couldn't manage without your family...
You can also add my mother to the list, who takes care of the business side. She juggles the figures and the contracts, which I'm incapable of doing. When I was a little girl my father was my hero. But he didn't act like a pop star - there were never any huge parties at home. Our lives were centred around our family. There's a great unity between us. I had a truly marvellous childhood.

What does your father think of today's music?
For a whole period of time he wasn't interested in music, but he got back into it; actually he's in the process of writing a musical. He currently likes Siouxie And The Banshees and Morrissey. Last winter I bought him the Morrissey t-shirt of I Hate The Queen. He wore it at Christmas, it was very funny! On the other hand, he hates rap. In the family, I'm afraid I'm the only one who likes it... 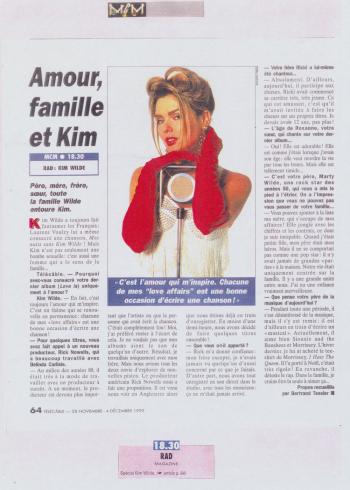