For 12 years the image makers laboured, but Kim Wilde is finally happy. No longer the girl next door with the weight problem and the famous father, she has a new album, Love Is, which shows just how long it takes to make a career...

We are in La Coupale, Paris, where the oysters are clear green and the steak is tartare. A selection of lobsters and crab are presented tiered, like a wedding cake; Kim Wilde is delivered like a princess. She sits down with a table of competition winners from Piccadilly Radio and talks to warmly, like they were her friends. Good old Kim, she'll always muck in. Well brought up, does what she's told, eager to please. Even though she's lost her luggage somewhere between Paris and Newcastle.
Her reputation in Europe has always superseded her British career. Us Brits find her about as exotic as Coronation Street: likeable, dependable, accessible, a home-grown institution - the daughter of a semi-famous singing star father. These were the things that sold singles, but failed to capture the imagination. She's played by the rules, which may be the reason she's survived a 12-year musical career as a 'pop star'. It is also the reason she nearly didn't. She never created any mystique. Her penultimate album, Love Moves, made while she was breaking up with long-term boyfriend Calvin Hayes, stiffed. She felt like an emotional alien, and she was often in tears - but only on the inside.
It's hard to imagine Kim as an old stager to Madonna, but 'Kids In America' had nearly topped the charts before La Ciccone had pulled on her crucifixes and fishnets. And while Madonna openly exploited her pain and misdemeanours, using the world as a confessionbox, Kim was more old-fashioned. She's never worn a corset as an outer garment because she thinks it frightens men.
She's done everything to present the cosiness and solidity of family life, although isn't there something curious about a father who writes sex paeans for his teenage daughter to siren?
She's been with her label MCA so long that she's survived four managing directors. She can talk about her evolution with a contemplative incisiveness and measured intelligence that the past 12 years' pop bimbette press hasn't prepared me for.
"As I started to become famous, I seemed to monitor way I dressed. I toned it down to jeans and a dinner jacket. I remember that Mickey Most brought in a police shirt he'd acquired for the 'Kids In America' video. He had this vision of me wearing it, hut I had other ideas.
'So although I carried on what I wanted to wear, I never did have a strong sense of my own style. With certain female artists you can't help feeling there's an awful lot that's been contrived. Sometimes I feel that I should have been more contrived. I'm not a natural with clothes. I have to think very hard." Which is why, when MCA engaged the Pet Shop Boys' image-makers XL for some of their artists, Kim sought their advice: "There were all these magnificent pop stars around, well turned out, and I was beginning to feel lacklustre, so we trundled to this office and they start producing these drawings - Barbarella in bondage, basically. They looked cute on paper because this woman had amazingly long legs, which I haven't, and I thought: 'Oh, I want this. All hair, all power woman'. So Lycra body suits were made, the sort of clothes Andy Bell would die for. Somehow the image did work in Germany, because I was a semi-cartoon figure. I wasn't real to them as I am in the UK. They don't have a subconscious idea about my father."
Now we enter the rather sticky, well-trodden territory of the family patriarch. Twelve years ago it was a convenient hook-line, but it almost became a noose around her neck. She loved him, she admired him and when she talks about him now it's in suede-soft sighs.
"He moves me as a performer, he really moves me as a writer, but most of all he really moved me as a man."
Goodness, can any male live up to this?
"1 haven't got a father fixation," she counters, but in the beginning he wrote all the songs for her. And what started off as a meeting of brilliant mind and vocal chords became an encumbrance. "I didn't feel comfortable singing the lyrics, so I couldn't sing them. But that was because I felt so bad and unfulfilled creatively. I had to write my own songs."

But it was her father, at a family meeting a year ago, who delivered a rather cruel-to-be-kind ultimatum. "He said: 'Kim you're letting yourself down. You've put on all this weight and it's started to show. It's not going down very well. People feel it's undermining your ability to go out there and compete. If you love your career you have to shape up'."
"I was staggered. I got very angry, because I'd been working very hard to make my life a success, and it wasn't working. I'd left London. I'd left my boyfriend. I was 29 and back living at home and it was hard being back there. I felt they'd ganged up on me. And I felt they were right.

"It's horrible to think that an album which I'd worked so hard on didn't sell because my image wasn't appealing. I wanted to put on weight because I wanted a barrier between me and the world, but I didn't realise it at the time.1 wasn't pushing men away; they are a separate issue. I push them away for different reasons - because a relationship doesn't have a future.
"I look at my weight in a different way. My boyfriend at the time really loved me, no matter what size. A slimmer version of me just gives me more power. It's completely calculated. I dieted because it was a career move. Love has gat nathing to do with how you're looking. I don't think if I lose two stone love win come round the corner tomorrow. But what might come round the corner is a film offer ar a lot of good press saying how positive I look.
"I had to be told I was fat, because when I look in the mirror I'm obviously not seeing myself. It's my own little hang-up and it goes back years and years. All women are insecure and I don't actually trust my own judgement."

It wasn't just her father who gave her advice on how to shape up. MCA's managing director Tony Powell worked particularly hard on Kim. "When I arrived at MCA she was a hit singles pop bimbo. Although she'd had the hits, her last album had only sold 30,000 units. I wanted her to be a serious artist.
"I'd had this phone call saying that Michael Jackson wanted her to open on his European tour. That was the exposure, the translation that she needed, and the Close album went platinum. It's always difficult for an artist who's had teenage fans to grow up, to cross over. I think we pushed her too hard too quickly to capitalise, and I didn't take into account problems in her personal life."
Love Moves, the follow-up, was so moochy Radio One wouldn't play it. Kim was at her lowest ebb. Pictures of a bulging stomach accompanied interviews in which she talked about dying her hair back to brown. "I reacted badly after the regime of the Jackson tour, where I'd worked at swimming every day. Every pop star has a body. I wanted to let mine go. I didn't want the obvious sexuality of being blonde, so I did this anti-blonde thing to coincide with Love Moves.
"There was nothing but pain in my personal life, so I looked to see what was wrong. I saw the blonde hair and an overtly sexy girl. I wanted to change all that. Unfortunately; no matter how hard I worked on the songs, my image couldn't compete."
Powell disagrees with Kim. "you don't have to be thin to have a hit record. It is unfortunate the way society, male society, perceives a thing of beauty.
"Love Is sees Kim 'spreading her wings'," says Powell. "She needed to shift with the shifting music market, follow the path of Belinda Carlisle if you like. It's earnest, sophisticated, honest pop-what Kim's always been good at delivering."
"All the pieces started to fit this year", Kim explains. "For the first time there's nothing I'd like to change about myself. It has been a slow, gradual process which took two years. My last big change was conquering my fear of writing songs. That was my first turning point.
"When I went to LA to work with Rick Nowels I didn 't feel in awe. I feIt that I had the potential to write as many good songs as he did.
"I went out onto Melrose Avenue, and discovered this silky floral print dress, really subtle and it suddenly felt right. Just the day before, I'd bought this little black dress, expensive, tight and strappy, and a fitted jacket with the word 'Wild' down the arm, and I knew that these were obvious and wrong for me. I have never worn them.' 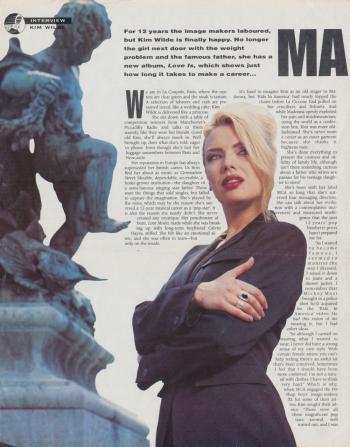 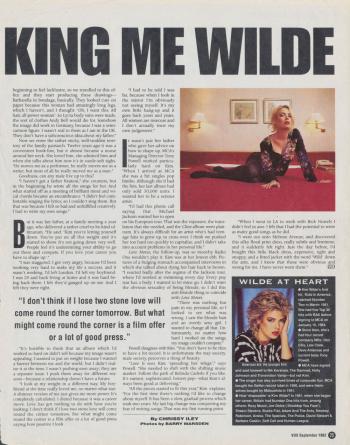