Kim Wilde, the beautiful 31-year-old British pop star who became an instant success more than a decade ago, has recently bouncde back into form after losing a stone-and-a-haf.

Her career is very much a family affair, her father Marty was a Sixties rock'n'roll star, her mother Joyce is her manager and her brother Ricki is a songwriter. She is currently on a promotional tour around Europe for her new album, Love Is.

Your favourite clothes?
When I started singing, I used to wear second-hand clothes and rolled-up jeans, which is very much my style. Then the image-makers got hold of me at a low point in my career and dressed me up like Barbarella on acid; all bondage gear ad tight black Lycra and catsuits. It was comical, definitely not me. But there is a side of me that likes glamour. Now and again, I love putting on something like this £4,000 dress by a German designer. It's a very graphic piece of clothes with lots of movement in it. But my favourite item of clothing would be a brown coat with a velvet collar that I bought 10 years ago in an antique market for £15. It's probably from the Forties. At the moment it has frayed pockets and it's falling apart so I'm going to have to get it stitched up again. I like second-hand clothes, they're usually so beautifully made. My figure is probably a Fifties shape, with hips and a small waist, so I have to be careful. Clothes that should fall straight down will hug my figure and not do me any favours.

Sexiest clothes on a man?
Something very casual. I'm always a bit suspicious of a man who looks as though he spends hours getting ready. If it's deliberate-looking, it seems vain. There's something very chic about a thrown-together look.

Your favourite shoes?
My favourites are a pair of black ankle boots with chunky heels from Pied a Terre which cost me £100 six months ago. I can wear them with everything. I also think trainers look quite funky with dresses. My stilettos have all been thrown into a plastic bag and hidden. I prefer shoes I can jump up and down in now.

Your favourite make-up?
Chanel matte eyeshadows in blacks, browns and earth tones; Clinique foundation; Estee Lauder powder. The two things I couldn't live without are my lip brush, which is by Yves St. Laurent and as fine as a Biro, and my Estee Lauder eyebrow pencil. They help frame the face and produce a quick, simple and effective make-up.

Your favourite perfume?
Paco Rabanne's Eau de Calandre, which my mother uses, too. It's very refreshing and I've worn it since I was a teenager. Every time I put it on, someone always asks me what it is. Claudia Schiffer (Chanel's top model) asked me when I met her in Monte Carlo recently. I thought: "I bet she wishes she didn't have to wear Chanel..."

Who does your hair?
When I first went blonde, I had a complete disregard for my hair. I'd buy boxes of Born Blonde and smother it on. It ruined my hair eventually and was one of the main reasons I went back to natural for four years. Then I got very bored with it and since then I've been having it dyed professionally at Vidal Sassoon once every three months.

Costliest thing you've ever bought?
All my money goes on the mortgage and maintaining my house in Hertfordshire. It's a 400-year-old barn and I had it completely renovated. The furniture is what I'd call shabby-chic, an eclectic mixture of antique and modern. I had an oak kitchen made and fitted for a lot of money and went off it as soon as it was installed. It could have been the most expensive mistake I've made in my life, but a girlfriend suggested I have a go at painting it. It's now a solid olive green and looks fantastic, like a kitchen from the Twenties or Thirties.

Who would you most like to look like?
The French actress, Catherine Deneuve. She has a very classic beauty, but there is also a sense of mystery about her face.

How many outfits in your wardrobe?
About 50 coats and jackets - I have a fetish about them - and about 30 dresses and 100 or so different tops and trousers. I have a nervous breakdown when it comes to choosing what to wear to Tesco's.

Most you've ever spent on another person?
A watch costing hundreds of pounds to replace one Mum had stolen. She knows me better than anybody, sometimes better than I know myself. When I was living in London, she was the one who told me it was making me unhapy. I didn't realise just how much until I left about a year ago. Even though some of my friends had lived in my area, I found London quite lonely. There was no feeling of community. I didn't feel I belonged there.

Like/Hate about your character?
I'm patient and perceptive. Patience certainly helps in this business; people do tend to talk at you or past you a lot of the time. You can't help but stumble across a few people who treat you like a product. On the negative side, I'm very secretive and that can hurt the people around me. I'm also very messy. I'm sitting in a hotel room in Switzerland at the moment and it looks like a bomb hit it. There are clothes, tights, shoes and bras all over the place.

Like/Hate about your body?
I like my lips, though it's taken me years. I used to hate them as a kid when the other children would say I had lips like Mick Jagger. They've been a great asset to me in my career. I exploit them shamelessly in how I make them up and how I use them. They're the most expressive part of my face. I hate the way my back dips in at the base of my spine and makes my bum stick out. It also causes me a lot of lower back pain and I have to do exercises and occasionally have physio for it. Two or three years ago, I put on about a stone-and-a-half, but I started losing it once I decided to leave London. It was down to alcohol, food and not doing any exercise, but it also had a lot to do with low self-esteem. I was approaching 30 and thought I was going to seed. The album before this wasn't successful so I thought: "I've been in this business for 10 years and maybe that's my lot." But I've got my figure and my ambition back now.

Books by your bedside?
A Year In Provence by Peter Mayle, which I keep re-reading. France is my favourite country, I dream of ending up there as an old lady. I love its tradition, its continuity, its eccentricities, its language. France is a country that works to live, whereas Britain lives to work.

Most embarrassing moment?
I was in Holland singing live for an audience of 50,000 people to a pre-recorded track that began to slow down. It groaned and groaned then ground to a miserable halt. I finished the song, and went over and said something unmentionable to the sound guy. Then I ran to my hotel, where I got stuck into a serious amount of Remy Martin and wouldn't come out.

Your favourite drink?
Diet Coke, Perrier and Evian during the day. A glass of wine or champagne in the evenings - countless glasses if I'm with friends.

Can you dance?
I've been doing flamenco at a class in King's Cross. I love it; it's incredibly passionate, rhythmical and physically demanding.

What do you wear in bed?
Mostly nothing. I hate feeling restricted.

Your best friend?
Clare Smith. We met at school when I was nine. She runs a successful catering business called Food Works. She knows everything about me and still likes me. She doesn't treat me any differently than she did before and I don't even know if she buys my records. I like that.

Would you prefer to have been a man?
I'd like to be a man for a day or two to see what it's like. But otherwise, no. Women allow themselves to live through their emotions more, they're more intuitive because of that. They make great bosses; they're much better at coping with the realities of life.

What famous person would you like to dine with?
Princess Anne. I have a feeling we'd get on very well. She's very cool, very funny, very intelligent. She has incredible dignity. The way she's handled her public life has always been immaculate. I also think she's incredibly beautiful; her beauty shines from her soul. I saw her once at a charity function in a very contrived meeting and would have loved to have carried on talking to her. I probably never will. But with that one exception, I'm not really into meeting famous people, no matter how much I admire them. I was brought up in an atmosphere where fame was looked on as a tool of the trade. I feel uncomfortable with the star-worship mentality. The real heroes in life are the invisible ones.

Your epitaph?
She loved to live. 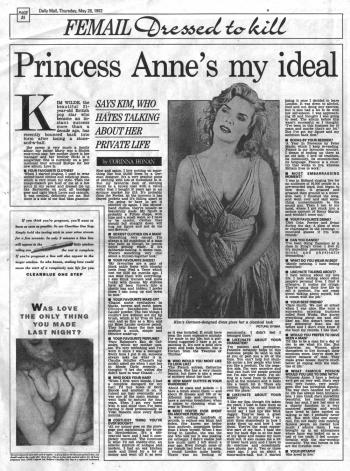