Kim Wilde is persistent. The fact that 'Love moves', her last album, came out in a frank indifference did not disgust her of love. So, after this half-failure quickly digested, she locked herself in a double round in her country house to concoct a new opus she titled 'Love is', a manifesto that says the same thing more peremptory.

In this eighth LP, the superb Kim (looking slimmer and like a clone of Basinger on the sleeve) continues her work as an anthropologist of things of love and methodically dissects all the states that carry lovers: "I have not suffered badly in this area, "explains this romantic Englishman with dramatically blue eyes and who seems to know a lot about the issue. It is that we did not see growing this ex-'kid in America 'sexy and sulky, who rolls his bump in the circuit for twelve years already. With his standardized pop but meticulously tied, Kim Wilde remains the most beautiful emissary of His Most Gracious Majesty. 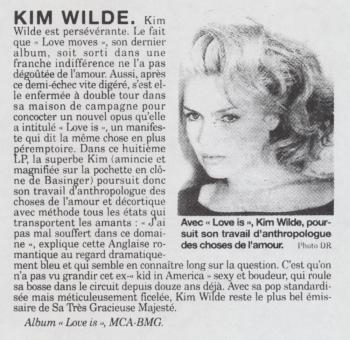