She drives us Wilde

People who earn their living by creating stars were hardly working on Kim Wilde's image for 12 years now and they finally succeeded. She is not the girl with excess weight anymore. Kim is a star and she has a new album 'Love Is'.
Her reputation was always better in Europe compared with her home England. But she developed further by the 'rules' of the business, which is maybe the reason why she survived as pop star for so long. Her previous album 'Love Moves', written while breaking up with her long-term boyfriend Calvin Hayes, turned out to be quite clumsy. Kim was emotionally estranged, though she tried not to show this. It is hard to imagine Kim as a veteran on the pop scene and compare her to Madonna. But her song 'Kids In America' almost reached the very chart top well before Miss Ciccone to enforce her image. And while Madonna was exploring her suffering and bad behavior, Kim showed herself as a bit more old-fashioned. She has never worn a corset only, as she believed that scares men. Kim Wilde did her best to present the comfort of the family life in the best possible light, although it is quite weird a father to write extolling sexual anthems for his daughter, in order to make her look like a seducer. In a serious conversation about a year ago her father said to Kim: 'You fail yourself. You raised your weight significantly and that started to show... This fact lowers your chances to be as competitive as you were. If you care about your career just a little, you will do something about it.'

Kim is completely shocked: "It is terrible to realize that the album you are working so hard on doesn't sell because of your image is not appropriate". On the questions about her weight she answers: "My boyfriend loved me no matter how much I weighed. I put myself under a diet only because of my career. Love doesn't have anything to do with the way I look. I don't think that if I lose 10 kg, the love will knock on my door first thing tomorrow morning. What I can achieve by doing that is to get a movie role or positive feedback from the press".

It is not only her father who advises her how to develop further. Tony Powel, the MCA company boss she has a record deal with, also works hard on Kim's image. The result ­ Michael Jackson asks her to open for his European tour. It is always hard for a singer who has teenager fans to grow up. "I think that we were putting too much pressure on her, not taking into account the problems in her personal life", reveals Powel.
The 'Love Moves' album was sodden with such a sad mood, so that Radio One refused to play the songs.
"It was nothing but pain in my life, so I took a look around to see what was wrong. And I saw the blond hair and the girl it belonged to. I wanted to change all that, but despite the hard work I put on the songs, my image didn't change", says Kim.
Her new album 'Love Is' is sincere, sophisticated and genuine ­ actually it was exactly like those Kim Wilde was skillfully doing by now. "For the first time ever I didn't want to change a single thing. Making the album was a long and gradual process and it took me two years to complete it. The only change was to defeat my fear of writing songs". Apparently there is nothing that Kim Wilde should be afraid of ­ she is still the common favorite. 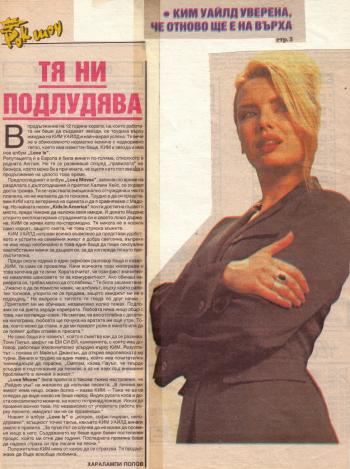