Singer Kim's parents told her: Lose more weight or you're through

It took a painful, crushing showdown with her family to finally convince pop star Kim Wilde that she had to lose weight - or wave goodbye to pop stardom.

For more than a year, after the happy summer months of 1988 when she'd supported Michael Jackson on his European tour, Kim's weight had been steadily creeping up from a trim eight stone to a little over 10. Her next album, Love Moves, flopped and pictures of a chubby-faced Kim began to appear in newspapers, alongside claims that the former blonde bombshell of British pop had "let herself go."

As her 3Oth birthday loomed, a crisis meeting was called at the Wilde family's home in Knebworth, Hertfordshire. Her father, former rock'n'roll star Marty, mother Joyce and brother Ricki, co-writer of all her hits, did not mince their words.

"My family sat me down and said 'Oh, by the way, Kim, you're looking a bit fat. You're not doing yourself any favours. Have you thought about losing some weight?" recalls the 31- year-old star. I said: 'Don't you love me the way I am?'

And they said: 'Yes, we love you, but we don't think the public will in your present shape."'

Today, slimmed back down to a little over eight stone and looking sleek and sexy in a tight-fitting Kenzo suit, Kim recognises that those words were the turning point for her. She has a single, Heart Over Mind, a new album, written with Belinda Carlisle's songwriter Rick Nowells, and a whole new outlook on life.

"The remarks about my weight were very difficult to accept, but I knew that my family were right," she says. "I'd look in the mirror and think, 'Yeah -you look okay.' But I didn't really have a great amount of confidence in how I was looking, and I had started to wonder if I could ever compete as a pop star again.

My ambition had dwindled. I was beginning to wonder if I'd been expecting too much from life to think that my career would go on into my thirties. With putting on some weight, I began to think it was nature's way of saying: 'Come on Kim - you've got to get offnow.'"

Looking back now Kim realises that it was this loss of confidence which most concerned her family.

"It was a very difficult thing for them to tell me I was overweight, because it's hard for any family to tell their daughter something like that. It was almost like they were sitting down telling me I was an alcoholic - like Betty Ford with her family. But they realised that if I was going to make another hit album, I had to lose a lot of weight because I'd also lost my edge and my spark. I'd almost given up on myself."

Kim has no ready explanation for her gain in weight or loss of confidence. She'd been living in North London, eating and drinking out a lot, and went through a painful break from Mickie Most's son Calvin Hayes, drummer with the pop group Johnny Hates Jazz. But she doesn 't believe any one factor was to blame.

"It's always hard splitting up with someone, but I would never blame Calvin for any of the bad things that happened to me. It wasn't his fault. He is a lovely man. If anything he helped me through that time. He was a good mate. I think a lot of it wal just constantly being in the limelight for years and years. Being one minute adored and the next torn to shreds."

"There were some really unpleasant photograps in the press that really put the boot in, but it was true what they were saylng. I had let myself go - and I knew I had."

Kim's solution to her problems was to change her life completely, beginning with a move back to the Hertfordshire countryside, where she'd grown up.
"I'd actually been building a house there", she explalns, "a barn converslon that I'd been involved with for about a year or so - and it was looking like it was ready to move into. Timing wise it was perfect. I moved in on my 30th birthday, in November 1990, had an amazing party, and by that time I'd actually started to lose weight."

Her first move had been to give up drinking completely, and then to start running - two miles in the evening, every other day, through the fields around her new home. But just as importantly she threw herself into decorating her new place and discovered a way of life outside the pop world.
Kim says: "Now I've got a home I find I'm good at lots of things I didn't realise I was good at - putting up shelves, decorating the house..."
There's also a new man in Kim's life, but in keeping with her career-long pledge, she refuses to discuss him in detail.

"His name is Paul Holmes and he's in the motor trade and that's all I'm saying!" she laughs. "I'm very happy with him, yes - but I'm very happy all round."

Is she starting to think seriously about marriage and a family?
"Oh, I'm not in any rush tor that," she says. "I'm inter- ested in having a family, but it's not foremost in my mind. "I don't see that it's any better to be an old mum or a young mum - the most important thing is to be a good mum."

One thing's for sure. Kim Wilde won't be the sort of mum who is frightened of telling her children a few home truths, when the need arises. 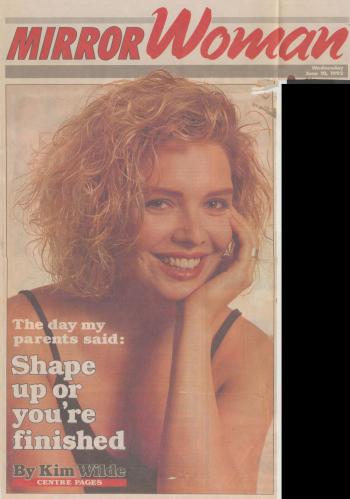 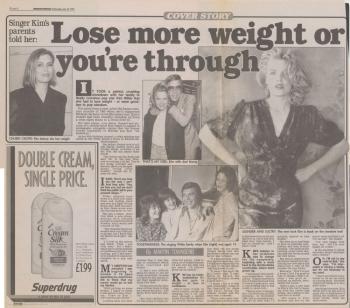