Kim's back with a hot new look.

If gentlemen prefer blondes, they'll just go wild over Kim. There's nothing like a new image to make a girl feel like a million dollars, and Kim Wilde's Marilyn Monroe look - created for the video of her new single Love is Holy - is pricelessly sexy. This isn't the first change of image for Kim, 31. In the past two years, the singer has been a peroxide blonde vamp, a sophisticated lady with a brown bob and now a stunning Monroe lookalike. "When I had my hair done, I didn't like it at first", she said. "But now I love it." Kim's dress, by German designer Jill Sanders, cost Â£4,000. But Kim says it isn't really her scene. "I prefer more funky clothes - and it was a nightmare to work in", she said. A year ago she would not have been able to squeeze into it. But she has lost 1,5 stones since then, through healthy eating and exercise. Kim said: "I decided to get my life straight. I wasn't happy with the way I looked and decided it was time to do something about it. After living in London for eight years I'd just moved out to the country, to Hertfordshire, and it was like starting a new chapter of my life. I do step-aerobics, which is very popular in America now. It involves a stepping action coupled with upper body movement so you get an all-over workout. I do it for an hour every other day. It really works." Kim has been going out with Hertfordshire car dealer Paul Holmes for more than a year. So can we expect wedding bells? That's the one subject on which Kim is keeping mum. 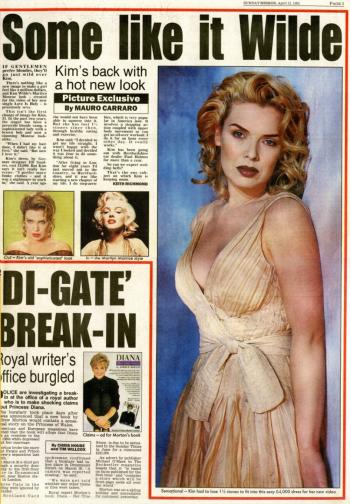