If Kim Wilde wasn't already here, Stock/Aitken/Waterman should have invented her. So perfectly has the now 32-year-old conquered the music business. Kim Wilde's producer is however more certain, it comes from her family.

Between 1958 and 1962, the name Marty Wilde filled the British charts. With cover versions of American hits he celebrated many successes. His daugher Kim, born in 1960, grew up with all the records, that were part of a good collection. Kims talent was soon discovered, but daddy first wanted her to get some proper schooling before the career could take off.

Once upon a time

In 1981 Kim signed her first record deal, after singing on a demo for her brother Ricky. One of these demos ended up, according to the legend, in the hands of pop producer Mickie Most. "Kids In America", written and produced by brother Ricky, was number two in the charts as soon as in March. The song was the near-perfect pop track: a pop hymn with various influences. And Kim was the perfect artist for the song: a good voice, original styling and a dynamic appearance. The wild hit machine got into gear. Hits like "Chequered Love", "Water On Glass', "Cambodia" and " View From A Bridge" soon followed. All of them compositions by Ricky und Marty Wilde.

Siblings are not uncommon in the music business, just think of Mike and Sally Oldfield or the Cowboy Junkies. The cooperations are also longer lasting than the usual "We make love in bed and on stage"-duets. Despite this, Kim decided to start writing songs herself in 1984. Her selfconfident may have been improved by this, she remained a good child.
In 1986 Kim enjoyed a world hit after some difficult years with the Supremes classic "You Keep Me Hangin' On", and she kept us hangin' on with further hits such as "Another Step" and "Hey Mr. Heartache".
In 1988 the album "Close" followed: "You Came", "Never Trust A Stranger" and "Four Letter Word" (a Ricky and Martin Wilde-production) ended up in the charts.

Kim Wilde, the "Kim Basinger of the music scene", was also a good live act. Michael Jackson recognised this in 1988. He engaged her as support act for 34 gigs in all of Europe. Everything she has learned about live gigs, Kim insists, she learned during this tour. But from the stage with Michael Jackson she fell into a black hole: her fourth album "Love moves" was a complete flop.

Today I come to you once more...

Four years later, there's a new Kim Wilde album: "Love is". She started with the new work in February 1991, more mature and attractive than ever. For eight out of eleven songs, brother Ricky is responsible. With lyrics and in two cases also music he sees his sister beside him. Cooperation also comes from Rick Nowles, who is better known as the producer of Belinda Carlisle's hits. And another thing: Kim Wilde sings a duet with her twelve-year-old sister Roxanne. The coming years will be very wild indeed. 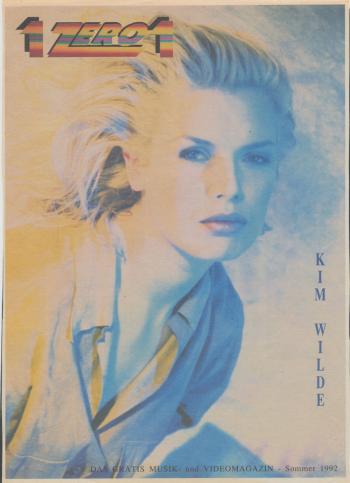 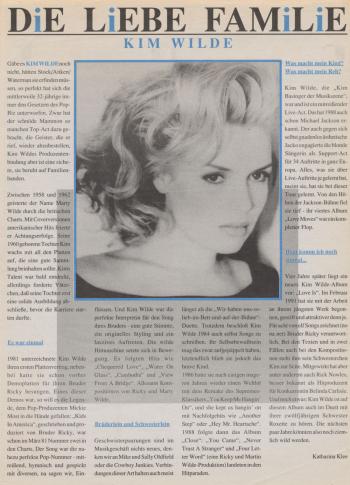