The extra pounds have gone, a new super disc is here: Kim Wilde, radiant and beautiful, presents "Love Is".

The saying goes "Trust no-one over 30"... Kim Wilde (born 18 November 1960 in Hertfordshire, England) has just crossed the border from twentysomething to adult age and is now a very beautiful woman, who knows exactly what she wants. Her new album "Love Is" is the feedback of her exterior: dynamic and exciting. "At the beginning of my career I suffered from the fact that I had to sing what others wrote for me. I think that feelings that come from your insides can be expressed much more truthful, especially when you write them down yourself".

On her new cd Kim is convincing both as a singer and as a songwriter.
The big success came to Kim at a very young age: eleven years ago she shot into the charts with "Kids in America". She symbolized the girl, which Americans liked: natural, blonde, a little naive. The change from a Pop-Lolita into an ambitious artist were not easy, but Kim did it with her own wits and strength. "I have a big self confidence. I knew I would make it." The family ties are strong: mother Joyce knew the show business from outside and in, she toured for many years with the Vernons, a girl group. And Kim's father Marty was one of the acclaimed Rock 'n' Rollers in the fifties. With ten songs he appeared regularly in the charts at the time.

"My father", says Kim, "has always encouraged me. I heard people like the Beach Boys, Simon & Garfunkel, Joni Mitchell and Kraftwerk in the house. Marty had a wonderful taste in music."

At first Kim wasn't found in the recording studio: she studied art and design. But when she started hanging around in the studio with her brother Ricky more than in the College library, Joyce Wilde took the career of her daughter in her own hands. Father Marty wrote the lyrics, Ricky composed and produced and Joyce managed the blonde Kim. "Cambodia", one of her first big hits, sold over a million times in France alone. "View from a bridge" and "Love blonde" became legendary. In 1983 Kim was voted best female singer.
In 1986 a further mega-hit, "You keep me hangin' on" followed, the coverversion of a Supremes classic. During his latest tour Michael Jackson hired Kim as Special Guest.

For herself Kim has chosen a clear path: she moved from the hectic London to the countryside, and lives now between chickens, cows and green trees and is at peace with herself. The new album "Love Is" profits from that too. Three tracks were produced in LA by Rick Nowels; the man who was also responsible for the big hits by Belinda Carlisle.

For the eight others her brother Ricky is as usual the producer. With power-pop-songs like "Love is holy" and beautiful ballads like "Try again", "Love is" is an album that proves that Kim's ambitions as a pop singer are fully justified. 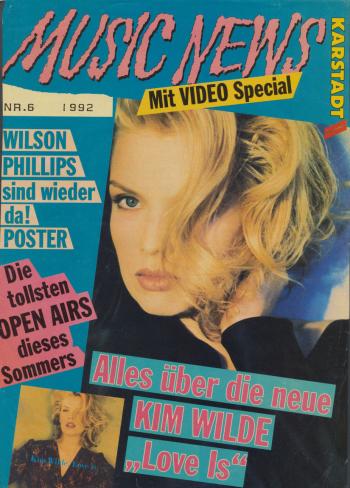 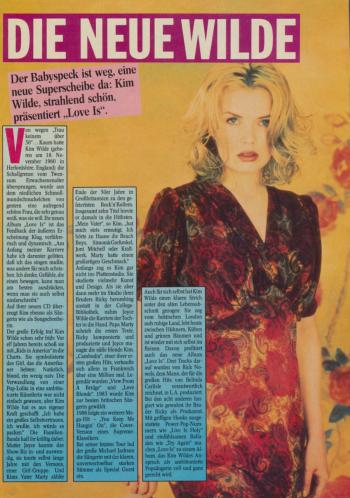