Smash hit with "Close". Missed with "Love Moves". Kim Wilde, part of a musical family, after a rejuvenating retreat returns with "Love Is". Banner of love, of course. Our interview.

Milan.
I remember I applauded Kim Wilde as a singer during the European tour of Michael Jackson (those were the "Bad" days). The blonde and charming daughter of Albion, it said, had been chosen and desired by Jacko in person and she did not disappoint the expectations: mastery of the stage, a supple voice and unique and of great taste and class repertoire. Those were the days of her sixth "Close" album, long-goer of the charts and father of five singles bestsellers, like "You came" and "Never Trust A Stranger". Unfortunately the following disc, "Love Moves", did not continue the success, achieving mediocre results while presenting, among others, a small gem like "The Beautiful Storm In Our Hearts". Time to defaillance that Kim exceeds brilliantly creative stagnation that leaves behind collecting ideas and forces opting for the bucolic atmosphere of the English countryside and relaxing instead of the polluted air and the stress typical of the cosmopolitan cities like London.
"Yes, the fact is that I knew within myself that "Love Moves" represented only a bad move, or better not entirely successful; it was simply to turn the page and rearrange ideas. So I retired for some time in the country, managing to look more closely inside of me. I was relaxed, calm, more confident and reflective: the best way to work on a new record. "

Kim adjusts her long blonde hair as she holds in her hands the fruit of that retreat, "Love Is". Eleven tracks much better than in the recent past, some uncertainty and some corners to smooth peek out here and there but overall it's a cool job, enjoyable, can restore luster and dignity to the British singer.
Beginning with "Love Is Holy", dozers piece and video fascinating, to get to "Who Do You Think You Are", chosen as the second round in 45, through "Touched By Your Magic" and the beautiful "A Miracle's Coming" . Of course, if you were to look after the title, "Love Is" remembers too "Love Moves" perhaps reflecting a mawkish and sentimental vein.

"Not really. For me love is real, perhaps the only balance of power, of our lives. As for me is the core of my being a woman and an artist; often, however, it goes from one opposite to another: that is, that it has too much or too little. This creates imbalances, mood changes that are reflected in the songs; although, I want to clarify, are not directly inspired by personal experiences. I look around me, I take note, describe and I play in my opinion. In this sense we must look for the key to better understand "Love is", a greater deepening and involvement from the previous work.

Yours is a family holiday in the seven notes. Your father was a singer Marty respected and quite famous at the end of the 50's and early 60's and your brother Ricky hangs out in this world practically forever, becoming your artistic alter ego today. Moreover, here come from the back of his little sister Roxanne just twelve years. How did you grow up in an environment like home Wilde, an exclusive club?
No, but you say. In fact my fate was already sealed the tender age, I admit. I lived in contact with the music from the first cry; capitavano home every day and at the strangest lots of people related to this world, settled down in the living room and began to argue with my father, they told stories of ordinary madness record stimulated by the fact that my father had put together over the years an enviable record collection, careful and critical to every new market trend or a sign of renewal both American and English. A passion that has never cooled but, rather, was very contagious.

If I am not mistaken you debuted as a vocalist in your father's records. And why did you want to give a chance to your sister Roxanne?
Six years, as you said, already singing with dad and therefore it seemed right to give my sister the same opportunity. For more Roxanne has a beautiful voice and well set. For some time, when I started working on the album, he made clear his intentions: to take part in that role was not important. On the other hand, I myself was noted by Mickie Most (legendary England manufacturer of the golden years) by accident while incidevo some vocals for a song my brother Ricky. Maybe the same will happen with Roxanne, why not.

The family Wilde form a very compact core and close-knit, for years now. Many successes and indeed few missteps, but do not you think that a relationship of interdependence may become so tight a limit to creativity, enclosed area for your talent?
It 'an opportunity that I never seriously considered, for the simple reason that I compose, write and work closely with many other people, for very different musical backgrounds. And here we come to the surface the two main natures of my being an artist, the more soulful and the other more marcamente rock. I mean. The others, I mean employees who are not my father and my brother, they see in me a singer very atmospheric, very soulful and it is this part of me that I intend to exploit; when it comes Ricky, it changes the register: in the sense that he, as a good fan of people like Billy Idol, focuses on rock vein. Take sides on that line as well my producer Rick Nowels, already known for working with Belinda Carlisle. If you listen to "Love Is Holy", for example, you'll notice very guitar-oriented, more direct and powerful. "Love Is" presents a varied menu, and I think this is the real secret of a good drive.

The disc also takes part Davey Johnstone, former right hand of Elton John. How did your collaboration?
I was in Los Angeles and he was recording in the studio just in front of the mine; They have presented and wanted to hear what I was hacking, being hit by a couple of tracks. So, in an absolutely natural way, he asked me if he could take part in the session. Astonished, I said yes right away. You must know that Elton John is one of my idols of all time and it is with Davey in education, in my opinion, has reached the maximum of his incomparable career.
And he suggested to include sitar and mandolin in a couple of pieces; I was skeptical at first but in the end, proof in hand, he convinced me. Davey is really unique.

You mean leave immediately for an American tour?
I go to America, but only for promotional purposes. From them I will go to Australia and only in the late autumn allestiro a tour. Starting this time from Europe (Italy included) offering almost all the pieces of "Love Is" more past successes. Perform in front of so many people is always a big emotion, unique. 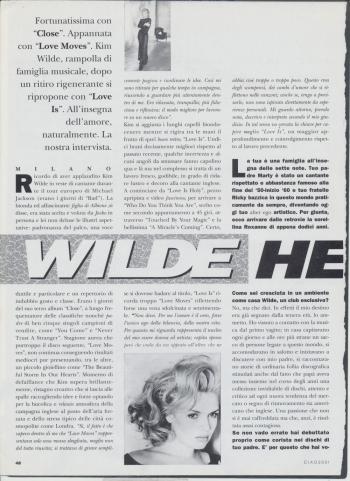 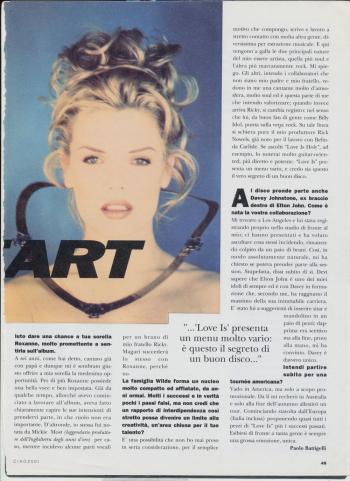