After a string of failed relationships and a career crash, Kim Wilde is back on top.

The love life of pop siren Kim Wilde seems to have made the headlines as many times as her music made the charts. But after a string of failed relationships with "emotional casualties" - as the British singer describes her former lovers - Kim, 32, admits she has a new attitude to love. As a result, she is the happiest she has been for years and has found true love in the arms of a university student nine years her junior. She happily describes the student, who she will identify only as Rupert, as "one of the best people I have ever met".
Kim admits that her parents' perfect marriage set a standard that she tried, but failed, to emulate. British pop legend Marty Wilde and wife Joyce have been together for 33 years.
"I always tried very hard to copy what they had when I was in my 20s," Kim admitted recently. "I'd see a guy who I thought was right, grab him and say, 'Right, you'll do'," she recalls. It was, however, a trying time, characterised by a string of disastrous romances and the gradual breakdown of both her career and emotional stability.
"I realised this notion that I had created wasn't real. I had invented it because I so desperately wanted to emulate what they had. I've grown up and stopped doing that now."
Kim was here last month to promote her retrospective album, The Singles Collection, with its hit single "If I Can't Have You", and to sing and be a presenter at the Australian Music Awards. Kim met 23-year-old Rupert earlier this year at a popular European ski resort and they've been together ever since. However, as Kim recalls, it wasn't exactly a case of love across a crowded room when their eyes met in a rowdy bar. In fact, he was having a hilarious time sending up the image of 'Kim Wilde'.
"He was being so drunk and obnoxious," Kim recalls, with a twinkle in her eye. "So I thought I would play him at his own game. He was very cute so I just marched up to him and said, 'I think you deserve to buy me a drink'. He thought I was about to slap him because he was being so cheeky."
The romance blossomed, but when news of it leaked out in the UK Rupert was quickly dubbed "Kim's toy boy". However, she just shrugs off any comments about the age difference.
On the comeback trail and with a happy relationship, Kim is looking better than ever after adopting a sexy Kim Basinger, sultry-siren style.
But it was different story three years ago, when her career hit rock-bottom and her personal life was in a shambles after she broke up with long-time boyfriend Calvin Hayes of Johnny Hates Jazz fame. Depression set in and Kim became virtually unrecognisable as her weight ballooned. Then Kim's life in London became too much for her to cope with and she decided to escape.
"What worked was moving back to Hertfordshire, where my family live. I found this wonderful place, it's just an old farm building that I renovated. "I discovered I was really very handy with a hammer and paint brushes. It was there that I began to settle down and be myself. I found out who I was. It really was the first time I'd stopped since my career took off when I was 19. I really liked it and it was important for me. I started to build my life up again and it has been on the up ever since."
The first thing to go was the weight and Kim shed 10 kg. Next, she took the first step ofher comeback with a successful album - Love Is - in 1992. Now with "If I Can't Have You" and The Singles Collection both hits worldwide, Kim Wilde is firmly back on top. 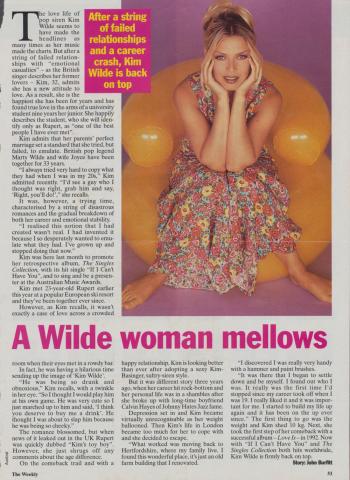 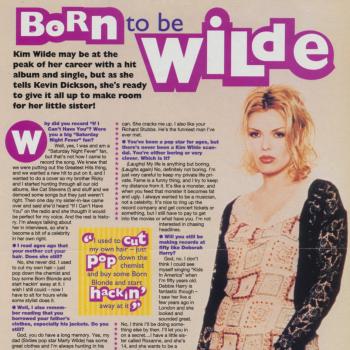