Kim Wilde may be at the peak of her career with a hit album and single, but as she tells Kevin Dickson, she's ready to give it all up to make room for her little sister!

Why did you record "If I can't have you"? Were you a big "Saturday Night Fever" fan?
Well, yes, I was and am a "Saturday Night Fever" fan, but that's not how I came to record the song. We knew that we were putting out the Greatest Hits thing, and we wanted a new hit to put on it, and I wanted to do a cover so my brother Ricky and I started hunting through all our old albums, like Cat Stevens (!) and stuff and we demoed some songs but they just weren't right. Then one day my sister-in-Iaw came over and said she'd heard "If I Can't Have You" on the radio and she thougth it would be perfect for my voice. And the rest is history. I'm always talking about her in interviews, so she's become a bit of a celebrity in her own right.

I read ages ago that your mother cut your hair. Does she still?
No, she never did. I used to cut my own hair -just pop down the chemist and and buy some Born Blonde and start hackin' away at it. I wish I still could - now I have to sit for hours while some stylist does it.

Well, I also remember reading that you borrowed your father's clothes, especially his jackets. Do you still?
God, you do have a long memory. Yes, my dad (Sixties pop star Marty Wilde) has some great clothes and I'm always hunting in his wardrobe for something to wear. Actually, just the other day I found a great outfit in there. I don't know what he was doing with them, but I found this great pair of purple leather flares. They're at the tailor's being altered right now.

What's your favourlte disco song?
Oh, that's easy. "Instant Replay" by Dan Hartman. I love to dance to that. He's a really good producer and songwriter, and I've been plannning to work with him for ages. Now he's done Take That's new single and he's done a great job and they're having a big hit with it. But it was my idea first. When I finish promoting this album I'm going to write some songs with him, and hopefully he'll be able to produce them.

Who do you like better - Brandon or Dylan?
I don't think I've ever seen that show. I don't know what they look like so I couldn't tell you. I don't see much TV. I do like Roseanne though. I catch that whenever I can. She cracks me up. I also like your Richard Stubbs. He's the funniest man I've ever met.

You've been a pop star for ages, but there's never been a Kim Wilde scandal. You're either boring or very clever. Which is it?
(Laughs) My life is anything but boring. (Laughs again) No, definitely not boring. I'm just very careful to keep my private life private. Fame is a funny thing, and I try to keep my distance from it. It's like a monster, and when you feed that monster it becomes fat and ugly. I always wanted to be a musician, not a celebrity. It's nice to ring up the record company and get concert tickets or something, but I still have to pay to get into the movies or what have you. I'm not interested in chasing headlines.

Will you still be making records at fifty like Deborah Harry?
God, no. I don't think I could see myself singing "Kids In America" when I'm fifty years old. Debbie Harry IS fantastic though - I saw her live a few years ago in London and she looked and sounded great. No, I think I'll be doing something else by then. I'll let you in on a secret 1 have a little sister called Roxanne, and she's 14, and she wants to be a singer. She's got the determination, and that's what you really need to make it. I can remember when I was her age and alI I did was listen to music and dream of being a singer. So I can see myself, with everything I've learned, taking her under my wing.

What's the strangest gift you've ever received from a fan?
God, I remember I got this huge cowbell from a fan in Switzerland!

Maybe he was trying to tell you something?
Yeah, I thought of that, but it came with this nice note so I think his intentions were good. But the bloody thing weighs a ton, and whenever I have to move it, it clangs a rack- et. But I haven't the heart to give it away, so it's still there. 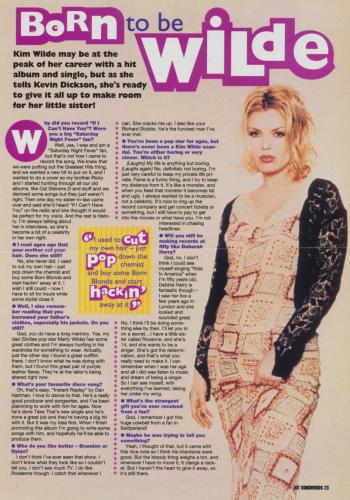