Graeme Kay steps out on a deadly date with the woman of his dreams.

She's stunning. Dressed in black flares, black top and a black leather jacket, Kim Wilde strolls in 20 minutes late for our date at the Museum of Mankind. And yes, I think to myself (as if the thought had never occurred to me before), I do fancy her. But hey, I'm a professional, so, putting all lustful thoughts to one side, I get on with the introductions. Formalities over with, it's time to nip upstairs to get an eyeful of what this museum seems to do best, this celebrating-the-dead lark.

But, hang on a minute, Kim's hungry. She asks if we can eat first and, being a gallant sort of chap, I agreethat we can. So off we trot to the exotically named Café De Columbia where Kim gets to grips with a planted sized Greek salad. Fabulous choice. such tast, such refinement. I tuck into a home-made lemonade (never let it be said that I don't know how to let my hair down).

'Cor this is brilliant', chirps Kim gorgeously. 'Really mega. Look at this lovely fresh coriander. Or is it mint?' Seeing a chance to impress her, I jump in with both feet. 'Oh, that's mint', I say in an offhand, ask-me-anything-about-herbs-I'm-an-expert sort of way. 'No, it's not, it's basil', interrupts Simon, the More! photographer, rather rudely to my mind. I throw him a look that could kill a grizzly bear and simultaneously plan a way to get my own back on him for embarrassing me in front of the woman I could easily fall in love with.

I steal a quick glance at Kim. Fortunately she doesn't really seem to care whether it's mint or basil (one in the eye for Mr Clever Cloggs photographer) but just to be on the safe side I quickly change the subject.

'So Kim', I ponder out loud, 'tell me about the video for 'If I can't have you'. It looked like you had lots of fun making it?'
'I have very mixed feelings about it', she says. 'I tend to get very worked up about things like that.'
'Why of course you do', I think to myself, 'you're an artist.'
'I do enjoy making videos but I get incredibly tense and I don't like that feeling. I'm glad I'm not a video director because I think I'd turn into a nightmare i I had pressure every day.'

But surely smashing all those things up the way she did must have been a great release? 'Yeah it was', she agrees, 'but I think the people around me enjoyed it more than me. There was a lot of latent aggression there. I'm not a very aggressive person so for me it wasn't a natural form of expression.'

She's so profoundly self-aware, I sigh to myself, before posting the next question. How do you go about getting rid of tension then? 'I make myself ill', she replies. 'I give myself flu that lays me up for days'. What? I gape, over-awed by the revelation of this startlingly original talent. Can you manifest the symptoms at will? 'Yeah. I didn't realise I had such incredible powers to do that. But over the years I've found that when faced with extreme pressures, I ill myself out for a few days.'

Then your family rally round and pamper you? 'No not really. They just leave me to get on with it. There's not much room for mollycoddling in our family'.

Resisting the temptation to tell her that I am in fact a fully qualified doctor who specialises in both molly and coddling and that if she ever needs me to come round here's my number, I begin to formulate the next question. But before I can ask it, I make the mistake of gazing at her full red lips, which makes me drift off into a dream world and lost the thread of the conversation. For a few desperate seconds disaster looms. But I'm saved in the nick of time as I remember that temperature-raising scene in the video where Kim takes her clothes off.

Why, I bluster, as the tips of my ear lobes start to redden, do you take your clothes off after you've smashed the place to pieces? 'I'd just seen this play on TV', she explains, 'where this woman was watching herself undress in front of a mirror. I think there's something very sensual about watching yourself in the mirror. I'm a bit of a mirror freak, I've been known to change several times a day.'

Now there's a thought. But before I can get too carried away, I notice Simon pointing at his watch. This is his signal that time is getting on and that we should start taking some photos. Reluctant though I am to break off my conversation with Kim for the sake of some silly old snapshot, I agree. After a quick stop at the ladies "to put on a bit more lippy", Kim joins me on the museum's main staircase where, under the benevolent gaze of three regally attired skeletons, we strike the first of several poses.

After several minutes of happy snapping, Kim declares that she's bored and wants to get her teeth into the exhibition proper. A hop and a skip later and we've entered the approprate area where we marvel at the exhibits and, given the theme of the various displays, start talking about death. I ask Kim if she thinks celebrating it in such a joyful, uninhibited way is a good thing. 'I think it is', she says. 'But I don't think us Brits enjoy life enough to enjoy death.'

Now we're getting down to the meaty stuff. Maybe I can impress Kim with some profound insights about the nature of existence. So let's get spiritual. Has she got any strong feelings about the afterlife? 'I sort of believe in it', she says. 'I believe in weird stuff'. Oh. This sounds juicy. Like what? 'I don't know too much about it, but I've been to a spiritualist who helped me resolve a few things with a friend who died without me ever having a chance to say goodbye. Although that left me feeling very comforted, it scared me so I haven't been back since. The spiritualist gave me enough to confirm my own feeling, that there are lots of things we can't and aren't meant to understand. But I don't think you have to understand things to take courage from them or have faith in them.'

Before I can show her what a caring, sensitive, spiritually aware and compatible kind of guy I am by recounting a spiritualist tale of my own, we're interrupted by a gaggle of fans (the first of many this afternoon) who've spotted Kim and are keen to get her autograph. So does she throw a wobbler at being recognised in public? Nah. Because Kim is, in fact, an all round good egg.

'I feel chuffed that kids of that age have an interest in me', she confides. 'And you know what they say - grab 'em young,  keep 'em forever, ha ha.'

Quite, I laugh, as Kim and I position ourselves for a final photo in front of a pouncing skeleton with branches growing out of it. What more can I say? Other than Kim Wilde, you're funny, you're beautiful and you're a great date. Doing anything next Thursday? 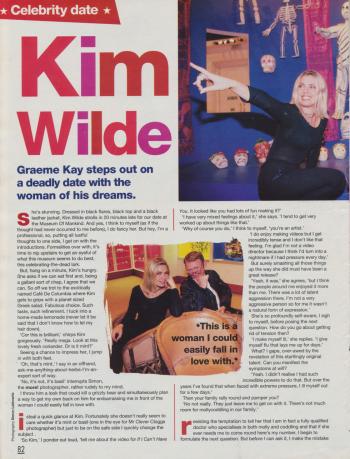 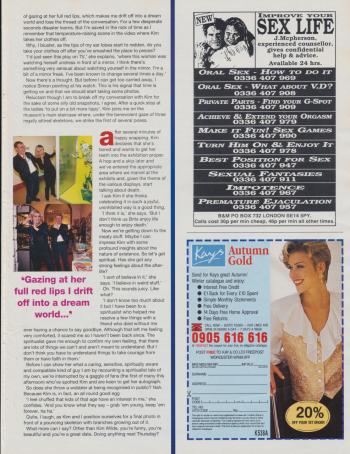