Years ago, she was cute and her songs were catchy. Now she's back in the Top 10 and in control. Stephanie Bunbury talks to Kim Wilde.

She had blonde hair and a prodigious pout. She was one of those girl urchins who prospered in the wake of punk, managing to look waifishly frail and terrier-tough at the same time. Even then, you probably confused her with Debbie Harry, just like you're doing now. But she was Kim Wilde and, for a while there, she was pop's number one spunk.

Now she's back with a single in the Top 10, a cover of the Bee Gees' 'If I Can't Have You' and an album of greatest hits in the shops. You won't remember all of them, but you will recall the catchy little 'Kids in America' and "Cambodia', which was a pretty good pop song by anyone's standards.

These days, Kim Wilde is well into her 30s, beyond the cute age but still looking good. She is also versy much a trouper: a few dozen interviews down the track, she is still ready to laugh. Her publicity minders adore her, and who wouldn't? She is so nice, so sensible, so absolutely unlike the Poppy Tune airhead she was often painted to be.

So why did a sensible English woman sing 'Kids in America' when she was not one? "I know, I know", she sighs, her face creasing readily into a rueful grin. "Well, obviously it was written by my brother Ricky and my father went off and wrote the lyrics. And he was brought up on American youth culture. It seemed as if the only people who had fun in the '50s were the Americans, with their Cadillacs and hamburger joints. Certainly it seemed like that in the UK.

"I was just singing the thoughts that were coming from my dad, quite innocently: I didn't even think about it. The music sort of had the vibe and didn't really have too many deep meanings.

People often sneeringly supposed Kim Wilde to be the creation of her father, Marty Wilde, who had a couple of hits in the '60s with songs such as 'Bad Boy'. He was pop's Pygmalion, the big bad wolf. But the grown-up Kim Wilde relates that while she always wanted to leave school and get on with being a singer, it was her parents who made her stay. And that when she started recording, she had no qualms about projecting that cooked-up blonde temptress image. She knew the game, and she was in it to win.

"My dad, being in the business, he very much took fame and the things that went with it as a tool of the trade, something you could enjoy, but very much a tool," she says. "I just remember thinking 'this is something that works, this is a trick of the trade... I can use my image, or my energy, or my sexuality, or my sensuality. I can use being a woman, I can use my personality to help me do what I want to do. And I thought OK, go for it.'

Still, she is happier with herself now. She collects things - intricately wrought birdcages that hang in her kitchen, gloriously empty of captive creatures, gaudy teatins from all over the world - that give her a sense of permanence in an industry founded on transcience. No matter how familiar she may have been with the starmaker machine before she began, it left her slightly shredded after the first couple of whirlwind years.

She also exercises and eats good food, a lot of it. In the past, she laughs, she was "a shrimp. Your body changes when you become an older woman; you become more curvy or voluptuous. I didn't really like it for a while but I love that about myself now."

Her facther has two more children to worry about, both born at the height of her stardom, who are now 14 and 12. Ricky, who still produces her music, has children. Kim Wilde is not just sensible; she is the sensible older generation. A strange plight for a singer of boppy pop whose voice, let's admit it, will never take her to the more mature heights of the chanteuse.

She is unfazed. When she supported Michael Jackson on a European tour in 1988, she realised her audience, like his, spanned the very young to the very old. "I think it's just an energy that they pick up from me. It's not an age thing; it's an energy and a very positive one, I believe. It's about optimism and it's about joy and it's about sharing and it's very healthy."

The junior Wildes fill in their groovy but ageing sister on the cult sayings and unpredictable fads of the schoolyard. "It's as if they have their own culture, almost. Sometimes I feel excluded from that and I want it, I want to have their culture, but that's what's so beautiful about it, that it's theirs. It's the point at which they can find their identity rather than become extensions of you. But the basic things are pretty much the same: the preoccupation with the way they look, the stuff about girlfriends and ganging up against each other. It's not all totally different."

Everything in perspective: feet on the ground, a cheerful smile on her face. Who wouldn't like her? 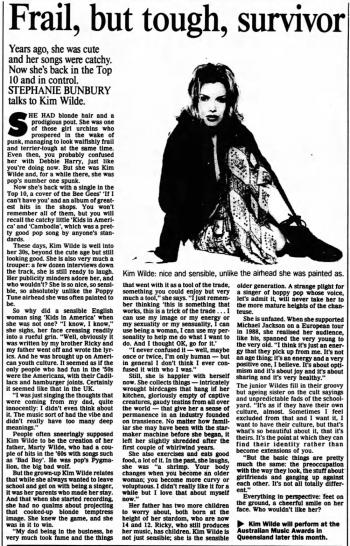