Pride of place in Kim Wilde's house, a lovingly converted 16th-century barn, goes to a magnificent old stone fire surround, focal point of the open-plan living area. It fits in so perfectly that it looks as though it belongs there, and yet it came originally from Provence and found its way to Kim's Hertfordshire retreat via LASSCo, the London Architectural Salvage and Supply Company. Since she started work on the barn six years ago, Kim - pop star daughter of 50s rock 'n' roll idol Marty Wilde - has made regular pilgrimages to St Michael's, a deconsecrated Victorian church just off the City Road in north-east London, where LASSCo offers a selection of "relics, antiquities and curiosities for the period house and garden". "It really is an Aladdin's cave", says Kim, leading the way through a yard in which the carved stone façade of a recently-demolished City office building leans against one wall, surrounded by a clutter of gargoyles, urns and assorted statuary. Inside, the place is stacked from nave to chancel with everything from solid brass doorknobs at £18 a pair to a complete walnut-panelled room, salvaged from a mill owner's mansion and on offer for £12,000.

"There are always so many wonderful things that catch your eye - you have to know exactly what you are looking for or you can end up getting quite confused", warns Kim who, on this occasion, is after a stone seat to put near her garden pond. LASSCo sales manager Les Smith reckons to find a new home for every item, however unlikely. The exterior of a pub in High Holborn went to New York while the Ark from St John's Wood synagogue was sold to a Japanese disco for £45,000. As well as her fireplace - for which she paid about Â£2,000 - Kim's other LASSCo finds include wooden panelling, removed from the Dorchester hotel during its refurbishment, and a stone pedestal. "I like old stone and I love things that are a bit beaten up and a bit distressed - things that have had a life and have got a history", she explains. With an unspoiled peronality to go with her looks and her success, it seems surprising that, at 32, she has yet to find anyone to share her dream home. Summoning her most dazzling, girl-next-door smile, she very politely declines to discuss this aspect of her private life, but adds that she is not at all concerned about missing out.

"I actually think I'm still quite young to be married", she says with a shrug. "If it happens I'll be delighted because I'd love a family. If not, it won't bother me. I'm surrounded by children anyway, with a niece and a nephew." Her career - which got off to a flying start in 1981 when her debut record, Kids in America, became a smash hit - has always been a family affair: along with Marty, who helps write the songs, her mother Joyce looks after management and brother Ricky produces the records. Kim admits that, when she was younger and living at home, she sometimes found this family set-up rather claustrophobic and, with her first royalty cheque from Kids in America, she set herself up with a flat of her own in St John's Wood. But after seven years she'd had enough of London, decided she wanted to live in the country again and found the barn in a village just a few minutes' drive from both her parents' home and the family-owned studio at Knebworth. "Living in London just wasn't fun any more", she says. "It had become so stressful. The final straw was when I become one of the first people to have my car clamped! I remember thinking there's no fun to be had in this town without you having to pay through the nose for it or put up with major hassles."

Her latest single, a cover version of If I can't have you from the movie Grease, will be followed later this year by a compilation album, The Singles 1981-1993. Although she has built a huge following in Europe (Cambodia sold a million copies in France alone) her fortunes here have fluctuated. She admits that she used to worry that she was perhaps not quite as big a star as she should have been, but is now much more philosophical about top pop success. "In some ways I thank my lucky stars that I never became a mega-star", she says. "I feel quite sorry for those people who are virtually imprisoned by their celebrity status. I think I've got the balance about right. In France I get met by a while Rolls Royce but here at home they stick me in a black cab with a train ticket to Bradford! Either way, I'm happy." 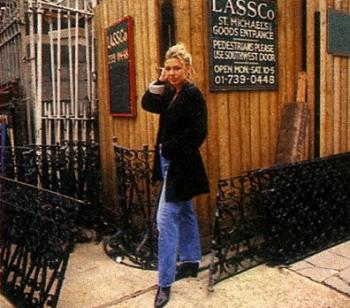 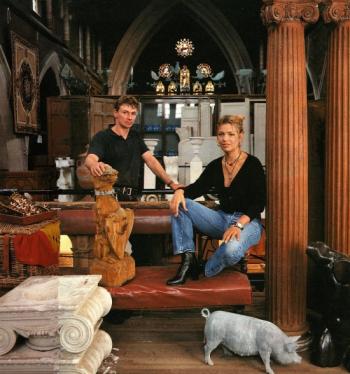