Blonde pop queen Kim Wilde is busy working 12 hours a day on a spectacular stage show - for her first British dates in three years.
Currently high in the charts with her smash single, If I can't have you, the comeback tour starts next month.
'I'd forgotten what it was like. There's so much to do.', says Kim who scored her first hit Kids in America 13 years ago.
"As well as the music, I've got to organise the dancers and the stage presentation - it's a full-time job."
Kim Wilde's 'Greatest Hits' UK tour is due to kick off in September at arenas and theatres and will tie-in with her next single, a duet with a well-known star.
More details of the record and tour will be announced in the next two weeks. But book early because the tour is bound to be a sell-out. 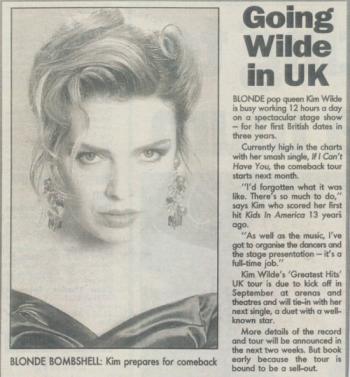