How Kim Wilde fell for the 'lout' who sent her up

As romantic encounters go, this one had all the hallmarks of total disaster. Kim Wilde, sophisticated British pop star, was out dancing with some friends at a nightclub. Suddenly a loutish student thrust himself into her line of vision and started belting out a send-up of her first hit, Kids In America, at the top of his lungs.  'If anyone else had done that to me, I would have disappeared pretty quickly,' says Kim. So why didn't she? 'There was a chemistry,' she confesses, blushing with the banality of it all.

At 22, Rupert Kenyon is ten years younger than his girlfriend. He would have been about nine when Kim recorded her first hit, so it is entirely probable that his mother had to buy it for him. As a second-year student in business studies and psychology at the University of Buckingham, he has all the infectious joie de vivre of a young man just embarking on adult life.

Kim, on the other hand, has battled for 13 years in one of the most pressured and fickle professions of all. She is regarded as a pop veteran and promoted as Britain's most successful female solo singer. But she can't look back and honestly say it was all great fun.

Two years ago she sank into what she now recognises as a clinical depression. She piled on a stone-and-a-half, drank too much and often wished she didn't have to wake up. Pulling through has involved a gigantic effort of will and has ultimately changed her entire outlook on life.

'I'd always expected to be married by 30, with two children and a big house,' she says. 'The fact that I wasn't probably mattered to me more than I realised. I'd been brought up to think that was what was going to happen. 'It's only now I've realised those were other people's dreams about how life should be. Now I've absolutely stopped thinking about the roses round the door and the two children, all those things I plagued myself with throughout my 20s. Those are old dreams and old illusions, and it's a waste of time thinking about them.

'I'm very open-minded about marriage now and I'm quite resigned to the fact I don't have children. I have a relaxed approach to the rest of my life. Whatever happens, I'll go with it. It may be a cliche, but it's true that if you go searching to make things happen, they never do.'

What did happen was that Rupert and his friends from the University of Buckingham injected the optimism of youth into a pop star who felt jaded at 30. After a couple of difficult years, she is about to re-enter the charts with an upbeat cover version of the Bee Gees' 'If I Can't Have You'. Later in the year, she releases a greatest hits album and starts an extensive British and European tour.

But she intends to take a week off every fortnight and fly home. She and Rupert see each other often, she says, and she has no intention of letting her private life suffer for the sake of her career.

'The age difference certainly doesn't worry us, and his friends are just people who are a lot younger than me and who are very, very optimistic about their lives. They haven't yet been decimated by life, and don't know that they might be. They feel indestructible, and I love that. 'They have been incredibly supportive, very pro the whole thing. They are not scared to take the mickey in a very gentle way. I take it as a great compliment that they don't pussyfoot around me, scared that Madam might get upset. I like their irreverence, because there's nothing special about being famous and being a pop star.'

This is not as disingenuous as it may sound. As the daughter of Fifties rocker Marty Wilde, Kim was famous from the minute she was born. Daily Mail photographer Chris Barham, who took the stunning picture on this page, remembers holding Kim in his arms the day she was brought home from hospital, while her father signed autographs at the door.

At 19, she was signed by a record company and hailed as a great new discovery. She seemed the natural successor to Lulu and Cilla, a well-brought-up girl-next-door who sang unaffected pop songs and wore Oxfam clothes. Her brother and father wrote the lyrics and music, her mother looked after the money side and Kim sang all her own harmonies.

You couldn't fault her. She was open and unpretentious, never revealing too much about her private life and never striking a pose. But while some albums were enormous hits, others inevitably didn't do so well. She would be raved about one month, pulled apart the next, and the strain eventually began to tell.

'I have always been very self-critical, a trait I probably inherited from my father. But I probably let it go too far. I imploded a bit with self-doubt and it had a negative effect. 'I felt I couldn't cut it as a person in the music world, that I was inferior to everyone else. I had grave insecurities about my voice, which have never completely gone away. I'd listen to the radio and think every record was so much better than mine.

'I think my lack of confidence stopped me doing a lot of live work. In this business, rejection is a very public affair. I have a vivid memory of being in Newcastle on some show with an American artist. As we arrived, the same paparazzi who had run down the street after me some months earlier came towards me. But they rushed right past and went straight for the American. I was absolutely gutted. It was a very sharp lesson on the realities of being a celebrity.'

A series of events in quick succession led to a breakdown. First her album, Close, was a runaway success, selling millions. Then Michael Jackson asked her to join his European tour as the opening act. At around the same time, she split up with Calvin Hayes, the drummer from Johnny Hates Jazz, who had been her boyfriend for two years.

'The album and the tour together brought me the most success I'd ever had. It was afterwards that I felt desperate. I moved from a flat in London to a barn in Warwickshire.

'Soon after my 30th birthday I woke up to this resounding crash of cymbals and thought: 'What's next? Where is my life?' Everything seemed set in place for a great career, but not for happiness. It was a kind of mid-life crisis 20 years early, and it hit me in a very profound way. I had a terrible sense of anti-climax. 'I had to work out whether I was going to completely redirect my life. I thought: 'OK, Kim, if this is how you feel, maybe you should get out of the business.' I was doing everything in a half-baked way. I wasn't going to the gym, I was eating and drinking too much, and I didn't feel good about my body. I knew I couldn't walk out on stage without feeling good about myself; otherwise I would just be wasting people's time.

'I think an element of allowing myself to gain weight was to put a barrier between me and the world. I thought: 'I'll prove to myself I'm as useless as I think I am. If I can make myself look as bad as I can, it will all make sense.' It was a kind of punishment.

'Unlike someone suffering from anorexia, I wasn't trying to get attention. I was trying to stop getting so much. I couldn't stand it any more. I wanted to be anonymous. I'd been playing to 150,000 people at a time on the Michael Jackson tour and perhaps that blew my brains. Certainly, I was pretty naive to think I could take all that in my stride. I was much more fragile than I thought.

'I felt worthless and ashamed. I had my health, a beautiful house I'd just moved into, a family who were backing me up. A lot of people would have died for what I had. But knowing that just made it worse. I felt I was even more despicable for feeling that way. I wished there was something tangible to blame.

'Now that I look back on it, I know that I was in a clinical depression for about three months. I was offered medication but decided not to go down that route.

'My family were great. Dad wisely didn't pander to the drama queen side of me. He was very sensible, just told me to stop drinking and start going to the gym. So I did, and then sometimes I would start drinking again and stop exercising. But eventually, I kick-started the next phase of my life and it was no longer an effort.'

As she picked up the threads, she started seeing a local motor trader. The affair lasted about a year. It helped her, she feels, to 'move back into normal life'. Her previous two longest-lasting affairs had both been with pop musicians, partly because she thought they were the only men capable of understanding her lifestyle.

'I was very naive,' she says. 'In fact, I tend to run away from the rock and roll lifestyle now. I don't feel comfortable in the company of other pop stars, I don't feel comfortable in a glamorous world. I always feel everyone else is much more glamorous, much more of a pop star than me. But it doesn't bother me any more.' Even now, Kim genuinely believes her looks are unremarkable. The truth is she has never looked more beautiful and vibrant. The slight chubbiness of her 20s has given way to a leaner, more sophisticated look which recalls the young Brigitte Bardot. Since a disastrous interlude in which image-makers poured her into rubber dresses and bondage gear, she has happily returned to markets and second-hand shops. Her new student friends probably dress much the same as she does.

'I've been seeing Rupert since the beginning of the year, and I couldn't begin to analyse why I'm with him,' she reflects. 'You have a chemistry with people sometimes that goes beyond understanding. These things happen in mysterious ways. Maybe it's a relief in a way, that he's not in the music business, but that's not the most relevant part. He works very, very hard, and he plays hard, too. I like that balance.

'I have average, uncomplicated aspirations now. They are basic things, like learning to accept myself, appreciate my strengths, build on them and not destroy myself. I feel at ease with myself.

'I think my crisis was necessary and probably prepared me for the rest of my life. It has given me strength to face anything, expected or unexpected, good or bad, conventional or unconventional. Before, I was too absorbed in myself and my career, and not in a healthy way. There was no balance in my life, I couldn't enjoy and appreciate what I had.

'Now I have a great life. I also know I have the capacity to change it dramatically quite quickly and quite easily. It's a frame of mind. I'm pretty much ready for whatever comes round the corner.' 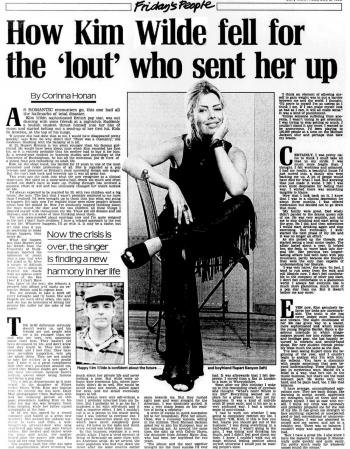