Kim Wilde: a greatest hits album, a boyfriend, a hit, a house and a garden

Kim Wilde is back. With 'If I can't have you'. A great reason to ask her: is Kim a happy person now?

'Very', she says beaming. And she has all reason to be. Because things are going well for Kim. Not just musically, also in her personal life she has got things in order. She moved from the big city, London, to the countryside, and lives in the same village as her parents now. There she can devote herself to her hobby: home decoration. Besides that her greatest hits album recently came out. Why did it take so long?
"Do I have to be honest? We felt that we needed a big hit if we were to launch this project. And we didn't have one. Until half a year ago. Rick's wife (Rick is her brother) came up with 'If I can't have you'. And because I had great memories of that song, we decided to release that one as the focal point of the Greatest Hits cd."
'If I can't have you' is an old Bee Gees song. It was released on the "Saturday Night Fever" album. When that came out, it was 1977 and Kim was 17. What kind of girl was she then? "Romantic. I still am. At that age I was looking for the wellknown prince on a white horse. And when I thought I found him, the love wasn't reciprocated. What was his name? John. I still see him in my mind's eye. It was the kind of boy everyone in school had a crush on. So he could pick and choose. It was a girl from my class. I had a hard time with that. The story of my life. Until I was twenty I didn't have much luck in love."
The tide has turned. She has a Greatest Hits album, a boyfriend, a hit, a house and a garden. "This year I have been able to pick the first fruits of my labour".

It began, long ago, with 'Kids in America'. And now, thirteen years later, some 17 million records of her have sold. 'When I heard those numbers I said to Nick, he works for the management, 'Nick, are you sure those numbers are right? Did you fatten them up for my biography?' He said: 'No really, Kim. That's how much you've sold.' And I was really surprised.' And this while she didn't have the intention to become a solo singer. She was in art college. "I wanted to become a session singer". Via her brother - whom she asked, 'can you arrange something for me?' - she came in contact with one Mickey Most, 'a big name' at the record company. She did some studio work for him. Her first cheque was in the amount of 60 pounds. "I can still see him sitting there when he wrote out that cheque. Later he had to write many others with larger amounts, haha". The same Mickey Most was responsible for her breakthrough not long afterwards. "One day I went to the studio with my brother Ricky, and the producer who worked there saw us coming. He said to Ricky: 'That sister of yours, she might be interesting. When I find the right song I'd like to record with her." It gave Ricky the idea. He thought 'If anyone writes and records a song with my sister, it will be me". So he went right back home, and wrote Kids in America that same evening." A few days later she went into the studio, a few days after that they played it to Mickey Most, and before she knew it it was a worldwide hit, and Kim Wilde was promoted from background singer to star. Now, thirteen years later, history seems to repeat itself. Because 'Kids in America' is released again. This time in a house version. "We can choose from two versions. One is made by the Rupino Brothers. 'Kim Wilde On Acid'. Sounds really great. Yes, I love house and dance music. And another one is being made. By the Development Corps or something. When it's done we choose the best one and release it. I recently made a video for it. Tht was a bit weird, because we didn't have the remixed version yet, so we had to do it with the original version."
The tenth real album is released next year, and before the end of this year a tour is planned. And as if that's not enough, she's celebrating her birthday this month as well. "Scorpio", she says, when I ask for her starsign. "It is weird but I always feel really good in November. Much better than the rest of the year. I love the cold and winter. I am a real winter person."

Are you interested in astrology?
"I do always read my horoscope in the paper. It's always the first thing I read. But I don't take it too seriously. Because you know... I once had my palm read. It seemed real innocent. Two of my friends were there too. He read their palms as well. And it all seemed to fit. I'll never forget what he said. He said, and I wish I hadn't heard it, that I would turn out to be someone who always compromises with everyone for the sake of peace.' So ever since the day he told me I have become very careful with that."
What is in your horoscope today?
"I read my horoscope in the plane and it said that today would be an unusual day. I would meet some kind people."
And? "To some degree that came out."
Are there any other things you would like to achieve?
"I would like to write a top 5 hit in America for another artist. Or a worldwide hit. With just my name on the sleeve, not my face. That would be fantastic for my ego." 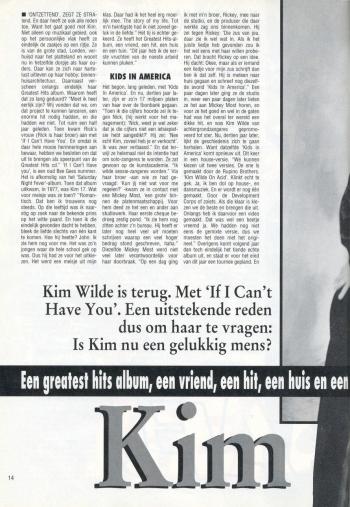 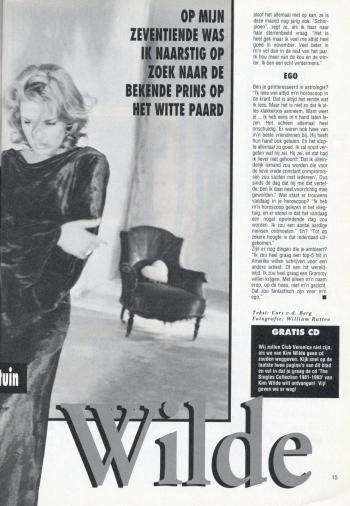