Kim Wilde: 'I have betrayed myself'

Twelve years after her first hit Kim Wilde (32) is back in the limelight with her cover of the Yvonne Elliman classic 'If I can't have you'. During that time the singer, who was born in Chiswick, West London, has changed a lot. She sketches the most important evolutions herself.

During 'Kids in America', my first number 1 hit, I was passively part of the punk movement. My boyfriend at the time was a fan of groups like the Sex Pistols and The Clash. He dressed like a punk as well and I followed his example. Punk was firstly a social phenomenon. I was always aware of that, although I never felt the need to rebel. As a teenager I was everything except aggressive. I was frightened by people who kicked all around them. My punk friends learned to hate everything and everyone, while I always believed in the good of people. Although I still love punk music, I resent the unwritten moral code of the punks. I don't identify with any movement anymore. Or better: I have a tendency to listen to people with other convictions as well. I have com eto the insight that it stimulates your own creativity and personal development.'

I have always trusted my own taste. Following fashion like a slave is absurd to me. Fashion begins with a good idea, but it becomes cheap when the outfits turn up in the boutique around the corner at discount prices. As a teenager I wore lots of second hand clothes, usually from Oxfam stores. My budget didn't allow for anything else. Nowadays I regularly have my clothes tailormade, and I strive for simplicity. The sort of sixties clothes I wear now is chosen by them. I don't have a lot of insight in that field. In all these years I still haven't learned which colours combine the best.

I have lived with my parents in Hertfordshire for quite a long time. After that I searched for happiness in the big city. Meanwhile I'm back on the countryside, in the village where I grew up. But you can't compare it with twelve years ago. Art became one of my favourite subjects. I my home there are paintings I made on the walls, and antique furniture that I have chosen myself. Back then I had mainly photos on the wall of my room. I always wanted to be surrounded by my 'friends' and always think about them. Meanwhile I have gained the insight that people only have a few real friends. I have lost my ideals a little in that area.

When I was younger I felt bad about being so tall. I am not a giant, but in school most other girls were a lot less tall. I remember that I leaned forward just to look less tall and wore shoes with flat soles. I have to laugh about that now. Not just because I have more perspective, but also because I have learned that your appearance is not important, it's how you feel about yourself. Also because I've learned that it's an advantage to be tall in this business. People are less likely to boss you around.

I have cut my hair myself for years. As a student I did it to save money. At first I had a sort of 'Linda McCartney' coupe. Until the release of 'Kids in America' and my record company felt that I looked 'too normal'. They advised me to use bleach and I changed style. In the beginning my hairdo was quite revolutionary. I remeber that many girls imitated it. I look back on that stunt with mixed feelings, though. Many saw that hairdo as a hint that I had no talent. It was a lot hard to be believable as an artist because of that. And I felt like I was betraying myself. he girl on stage wasn't Kim Smith, but the 'product' of others. Although I am still surrounded by experts, I let everything I do express my own personality now.

My brother Ricky and I went to a mixed school. That way I was in contact with boys already as a young girl. My first boyfriend was called Neil, but my first real relationship was with Calvin Hayes from Johnny hates Jazz. Our love didn't stand the test of success. I made one fatal mistake: at one point everyone was informed about my lovelife. Right now I have another real relationship, but I prefer to keep his name a secret. 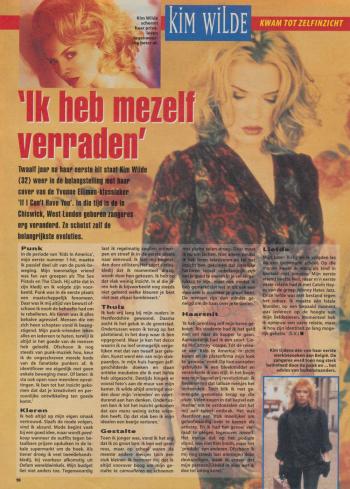