Kim Wilde: "I have discovered love"

One hasn't seen Kim Wilde, ex-'Kid in America', pouting person who made her debut crashing to pieces on the pop planet, it's been... 13 years already!
After the highs and lows professionally and a few romantic disappointments, the British csinger resumes her career with the release of "The Singles Collection 1981-1993", a compilation of her hits. She is also preparing a new album and a world tour.
Opened out, cleansed and having lost weight, Miss Wilde has found a second breath and her prince charming; after long years of loneliness. A meeting with a loving rocker.

Thus, you are no longer a heart to be taken?
No! I have never been this happy: I have finally met the man of my life, the person who is the most extraordinary. It's like I was swept up by a hurricane. I never knew that in the end he would end up with me one day, after all the wrong types I've known.

Who is this strange bird?
I won't tell, because he's too famous in England. Oh well, anyway, I'm too happy... It's Chris Evans, a famous presenter of television programmes in Britain. We met now and then, and then one day I was specially invited to his show. We were working with one another daily and saw eachother a lot. We didn't want to stop after that one week...

Good to marry?
(Assuredly) I've thought about it...

And your career?
In that area it's also my year. I have never been this easygoing about it. I have erased everything and started anew.

A first assessment...
I'm still standing after all these years. I was here before everyone else, before Madonna, before the invention of the CD! I have had magnificent moments, I remember my first award, in 1983, I was there in between Michael Jackson and Paul McCartney. And there have been less glorious moments, with undulations and flops... But today, this job isn't the centre of my life anymore. I have left London to live on the countryside. I live there and I have a quiet life. I decorate, I paint, I do the gardening, I ride horses...

Are you also close to your family?
Without my family, I wouldn't have been here. This business would have been able to destroy me a hundred times, one crosses there all the possible remains and nothing would have been saved. Often, the life feels bad. Fortunately, when I was in the fog, my family saw clearly for me.

Any regrets?
Not in the least. In the end, I did relatively few false steps. And also, I learned how to relativize, to be responsible. That helps. For example, when I had these bad love affairs, I was excused, I told myself that it was because of my cumbersome celebrity. But today, I know that, most of the time, that came from me, all stupidly... 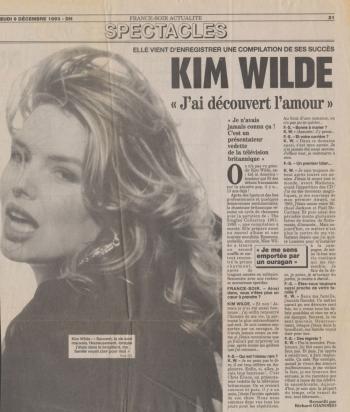