Kim Wilde is happy but alone: 'My lifestyle has become even wilder'

Kim Wilde (32) has almost come full circle. The singer recently released the album 'The Singles Collection 1981-1993' and is planning a new version of 'Kids in America', the song with which she debuted and broke through 13 years ago.

Kim: 'We wanted to open and close 'The Singles Collection' with the same song. Making remixes and covers are symptoms of this time. And I want to prove I like dance music. I think Utah Saints are very original and inventive. Because of time constraints the idea didn't go through. The remixes that are being made by the Rupino Brothers and the team behind the Urban Cookie Collective amongst others, are now meant for my next single.'

Is 'The Singles Collection' the end of an era for you?
I would feel bad if it were. The past twelve year I developed as a songwriter, had the chance to sing different styles and I was aways working with the best producer I know: my brother Ricky. That doesn't have to end as far as I'm concerned. I might change a little stylistically. Evolution is a necessity in modern music. This compilation cd came to be after a record company released a socalled 'Greatest Hits', containing only four real hits. I was angry and wanted to stop the release from happening because I don't want my fans to be cheated. On 'The Singles Collection 1981-1993' those first successes are there, but also 'Four Letter Word', 'You Came' and 'Never Trust a Stranger'. Even 'If I Can't Have You' is already on there.'

Do you have only positive feelings about the past 12 years?
Mostly yes. A lot has happened in that time. Sometimes my success was overshadowed by personal problems. I am 32 and I still don't have a real relationship. Let alone wedding plans. I can't disconnect my career from my life. My story isn't exclusively happy. There were few moments when I was totally happy. But it was an interesting time. I feel privileged to be able to sing and make records and perform for such a long time. Everything comes with a price. I had to lose some of my privacy to keep at the top. It was hard on me sometimes. Since I left London to live on the countryside, I think I have crossed an emotional border. I let things happen to me a little more, because I know I have a sanctuary for myself.

Still you were disappointed over the last few months. 'Love Is', your album from last year, didn't live up to the expectations.
The sale was, er, satisfactory. It was better than 'Love moves'. I got the impression that I was written off. I felt bad. Every career has its ups and downs. I had a hard time to get into the charts at that point. It made me want to attack even harder. I get the best ideas when I'm under pressure.

The inspiration came back to you as you moved back to Hertfordshire. Coincidence?
Yes, although I haven't recorded any song I've written over the last three years. Next year my tenth cd will come out. It will better reflect the changes my moving has brought on. The material will sound a lot more optimistic. On 'Love is' there are a few songs that I wrote during the time I wanted to leave London and bought a house. I had mixed feelings.

In an interview in your debut years, you said 'London is a paradise. One big feast. I don't want to ever leave.'
It was the period when I was partying with Sting and Tenpole Tudor. But I haven't lost my wild streak yet. My lifestyle has become even wilder. I didn't move to Hertfordshire to live quietly and tend to a vegetable garden. I never used to go to clubs. Just sometimes to The Wags. Lately I go there more often. Now tht I don't live there anymore, London has become more fun. It used to be a rut. When I said that, all of the showbusiness was new to me. I was very impressed. A little naive too. Blinded by the glamour. You know, I was barely 21. Now that I'm 32 I'm a lot wiser and happier.

Is it a coincidence that you chose a different environment on the 'magical' age of 30?
I wanted to do it earlier, but it didn't come to be. It took years to find an appropriate house. But I found out pretty quickly that London was not my real home.

From what you've just told, I can tell that it's wrong to assume you're filling your days restoring old furniture, gardening and playing with cats...
That's right. Or better: it's just part of my life. I like to spend some time in the garden. Decorating my home. At night I watch television. But just as often I put on my dancing shoes. Women in their thirties aren't geriatric.

You live a three minutes drive from the village you grew up in. Why did you return to your birth ground?
I feel good here and I know the area. I have a great understanding with the farmers and shopkeepers here. Contrary to London I can go to the baker shop, the butcher or the supermarket. The locals make me feel welcome. They treat me as Kim Smith. Live is less hurried. I don't get stressed. When I was living in St. John's Wood, I had to get up at 7am every morning to move my car to prevent it from getting towed away. London became a nightmare. Not because I couldn't take life there or because I was getting too old, but because of the atmosphere in the City. Last week I went to the area I lived for years. Since I left things have only got worse. The cricket field had to make way for a new building. And there's a ban on parking now.

Did you get bothered by the racial or social problems that are part of a big city?
No, I wasn't bothered by that myself. Most of the stories are overrated anyway. It's true that there are homeless people in Great Britain, but it's not as alarming as everyone makes it out to be. I was mostly bothered that I didn't see my siblings grow up. Roxanne is now 14, Marty 12.

How intense is your relationship with them?
I love seeing them. Roxanne, who sang backing vocals on 'Love is', wants to become a singer herself. It connects us. Recently I was asked to collaborate on an Abba tribute album. Like Björk and East 17 I was asked to contribute a cover of their biggest hits. I chose 'The name of the game' and Roxanne sings backing vocals on it. My elder brother, my producer, has two children: Scarlett and Marty. They are also very important to me. An inspiration, too. During the last few months I wrote one song about them and one about Roxanne. I see a lot of similarities to my own life: the first relationship, jealousy among friends... I missed all of that while I was in London. The only thing I had in exchange for that was invitations for receptions and dinners.

'If I can't have you' is a cover of Yvonne Elliman's song, it's on the soundtrack of 'Saturday Night Fever' and was a hit when you were seventeen. Is singing this song part of going back to your roots?
The idea comes from my sister-in-law Mandy, Ricky's wife. I wanted to do a new song on 'The Hits Collection', but I didn't have the feeling that I had material that was strong enough. So I recorded a cover for the second time in my career (the first one was 'You keep me hangin' on'). It's right that I have a lot of affinity with 'If I can't have you'. The song comes from a period when I was sure I wanted to become a singer. With Yvonne Elliman, who made her fame as a musical star, I felt less affinity. My father just composed the music for a musical that should premier this year, but I can't see myself play in it. It seems boring to do the same project for months or years. When I saw Olivia Newton John in 'Grease' singing 'Hopelessly devoted to you', it was inspiring. I was in Art College, but I wanted to get into music. My father was a singer at the time, but had stopped performing live when I was in highschool. I inherited the will to write songs. I remember him composing a top 10 hit for another singer and I was very proud of him. In that sense he was a rolemodel for me. It was mostly because of Abba and movies like 'Saturday Night Fever' and 'Grease' that I got a taste for standing on stage. Olivia and Diana Ross were my heroines. Just like Deborah Harry and Chrissie Hynde. 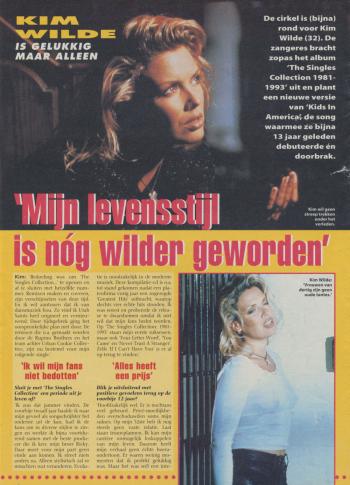 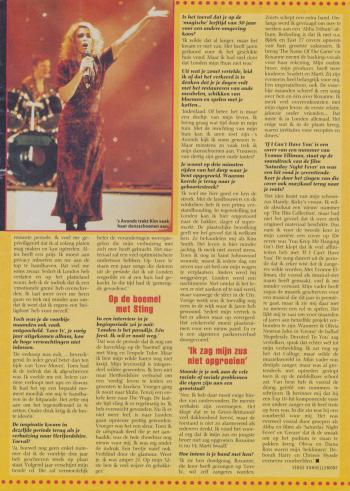