Kim Wilde: "Look what I can do"

Things are going well for Kim Wilde. She doesn't just look fantastic, she also feels very happy. Even happier than last year, when she told us (in May 92) that her life had gone better since she moved to the countryside.

"The years there have been the happiest in my life", laughs Kim. "Not because of a man or anything, I just got to know myself. I realised that I'm really just a simple person. Life isn't as complicated as I used to think."

The past used to be glorious for Kim. Hits like "Kids in America", "View from a bridge" and "Cambodia" brought her to great heights. According to Kim and her brother Marty (the mind behind her songs) this was the right time to release a Greatest Hits-album. The basis of the cd became the single "If I can't have you", a cover of a Bee Gees song. Kim: "That was an idea of my brother's wife. She really liked that song in the old days. We tried it in the studio and we thought, 'yes, this is hot!'. We have been working with hits for long enough to know whether something is right.

The past few years Kim has had no big hits anymore. Her album "Love moves" flopped and also last year's cd "Love is" disappeared from the charts quite quickly. The single "Love is holy" did reasonably well, but it wasn't a real big hit. Kim is sorry about that. "It's frustrating to release an album and it doesn't do well, even though you know it's good. I think it's challenging to try to score a hit. It makes me creative and it gives me energy to work harder. Some bands work differently, they don't work within the margins of the charts, they find other areas. Live concerts or something. Fine. But I prefer the charts.

Although Kim still works with her brother, she writes songs herself as well. "In fact I'm a co-writer. I work with Ricky and a lot of other writers. I write songs for others as well. I'm working with a band which is produced by my brother. It would be great if they recorded my songs. I know that people will react like: if you can write so well, then why don't you write your own songs? Well, because they don't fit within my style. They're more soul oriented, a bit like Lisa Stansfield. The best writer for my songs is my brother. We have found this over the years. The songs that people know me from, are straight-out pop. Before that the fans buy my albums. But that is not everything I can do. Alas people think I can't do anything else so I'm going to spend the next few years proving them wrong. That's my next challenge: to reach more people and to show them what I can do. My new album is a good time to start this new period.

The past few years Kim has experienced a lot, highs as well as lows. What made the biggest impression on her?
"I think I'd have to say my parents", she laughs. "They make a big impression on me for all my life. They're the most important people in my life, in all kinds of ways. They have shown me who I was, when I didn't know it anymore. They're still very important to me."
Kim's move to the country brought her back within walking range to her family. She needs her parents, brothers and sister to feel good and is not ashamed of that. "I am a real family person", she acknowledges.
We said it in the beginning: Kim looks fantastic. She's almost 33 and is still as attractive as ten years ago, when her pictures hung on the bedroom walls of girls rooms, girls who were trying to look like her.
"Oh well, that time is over", says Kim with a semi-sad face. "Today I don't feel attractive at all, I feel old. You know, it's easy to look appealing, when there's a man to take care of the lighting, and someone to put make-up on your face. But nobody would want to look like me when they see how I look in the morning. I wouldn't even want to be me then!" 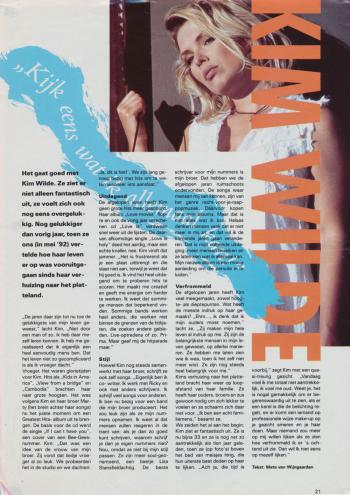