This is the new Kim Wilde. Two stone slimmer and with a toyboy 10 years her junior, Kim now looks and feels a million dollars at 32. She's put a series of heartaches behind her, abandoned the rock 'n' roll lifestyle she once led and fallen in love. Yet this time last year she'd reached rock bottom. Overweight and clinically depressed, her career was in tatters and she'd given up hope of ever finding a man she could trust again. Kim tells Sun Woman how she bounced back and is on the way to the top once again.

Kim Wilde has climbed off the crazy rock 'n roll roller-coaster - tamed by a toyboy lover ten years her junior. University student Rupert Kenyon, 22, was just nine when Kim was in the studios recording her first hit single. But his influence has transformed the life of the 32-year-old Wilde girl of pop whose new hit If I Can't Have You is at No. 12 in the charts.

Kim says: "I've been seeing Rupert since the beginning of the year but I coudn't start to explain why I am really with him. You have a mysterious chemistry with some people which sometimes goes beyond understanding. Women would do a lot better if they just listened to their instincts - whether the guy is ten years younger or ten years older. It's thanks to Rupert that I have a much more positive attitude to life. Good things tend to happen to you if you have a good attitude - bad things happen if you have a bad attitude.

"I run away from the rock 'n roll liefstyle. I don't feel comfortable in that world any more. I have average, uncomplicated aspirations."
Kim is lining up a European tour later this year but refuses to be away from the millionaire's son for long. She plans to fly back every two weeks to see him. Finding happiness with Rupert - who is studying psychology and business - came just in time for Kim, daughter of Fifties rocker Marty. She spiralled into clinical depression when she split from Johnny Hates Jazz drummer Calvin Hayes after two years in 1991.

And she became so uptight that she rarely ventured from her flat in St John's Wood, North West London, because she hated people looking at her in the street.

Kim says: "The split coincided with my album being unsuccessful. I lost all motivation then. And I think the most important thing at that point in my life was there wasn't really a balance. Whereas now if anything bad happens, whatever it might be, there's an equilibrium and I can deal with it. Hitting 30 was also a difficult time for me. I'd been in the business ten years and it felt like a long time."
Kim's 5ft 6in frame ballooned from a trim 8st to nearly 10st - and her confidence plummeted. She recalls: "I went to restaurants a lot and I wasn't exercising. I would drink as well. I was rather an ignorant drinker. I didn't realise what effects alcohol can have on you. I didn't associate liquids with putting on weight. There were other factors too. Things in my personal life which weren't right. I didn't like where I was living in London. My flat just felt like another hotel room to me. It didn't feel like home."

"London is such a stressful place. You're always worried about your car, where to park, the nutters. You just can't relax and I think it was that combined with a stressful career that really took its toll on me. It was getting to the stage where I was saying to myself, 'I don't want to go out today because I don't feel like being stared at."

"If anything bad happened I would go crashing to the ground. But I began to realise I was going to end up in a great black hole if I carried on like that. Finally it was a matter of going up or going right down. There's not much of a choice there. Up is the only way to go and I'm a born survivor."
Kim's first step towards recovery was to move out of London at the beginning of 1992. She bought a 400-year-old barn in Hertfordshire, nearer to her family home and old school friends. And she started to exercise and eat sensibly. Kim ways: "I started off running two miles a day around my home and then I joined a local gym in Stevenage."
She now exercises for two hours, five to six times a week. Kim says: "I like doing step classes. You can lose yourself in the music for a while and get a good workout. I do a lot of stretch classes and things to generally make my body more supple. Sometimes I do circuit training as well which is hilarious. The class is full of extremely fit men racing round a field leaving me in their wake!"

With the new fitness regime came a new diet. Kim gave up slap-up restaurant meals and booze for a diet of cottage cheese, salad, grilled fish and steamed vegetables. She lost more than a stone and found her self-esteem. Then she met Rupert during a skiing holiday in the French resort of Val D'Isere and his love has helped her put her terrible two years firmly behind her.

He chatted her up at a nightclub after serenading her with his own version of Kim's 1981 smash Kids In America. Now she frequently visits him and his pals at the University of Buckingham. "She says: "Rupert is studying hard and I'm working hard on my music but we see each other as often as we possibly can. He has lovely, sweet friends, who are all unpretentious people. We all go out together and they are very comfortable with me. They take the mickey out of me being a pop star - which is refreshing."
But Kim says: "I am wary talking about personal things which are precious to me. I've grown up reading about stars who flaunt their personal lives for publicity. The relationships only end by breaking up. I think that's sad. If you've got something precious in your life it's best to keep it as precious as you can. I am ver yprotective about the people I know. I was the one who chose to be famous, not Rupert, although he's very relaxed about the whole thing. It's me that doesn't like it. Before I was too absorbed in my career, there was no balance. Now I have a great life." 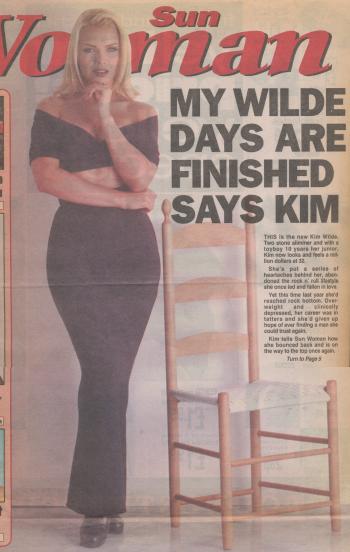 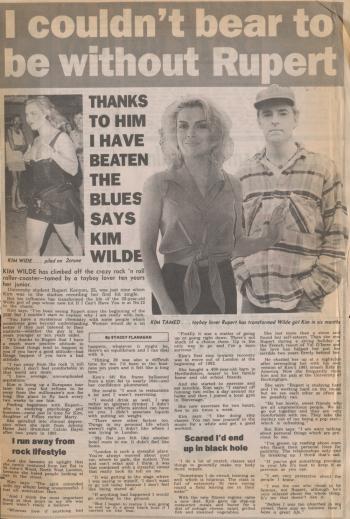