Serial killer Joel Rifkin met and kissed his idol, English singer Kim Wilde, according to an article in the American press. He met Kim during a visit to America when she was number 1 with the song "You Keep Me Hanging On". Joel, who killed twenty hookers in his garage in New York, was a big admirer of the singer. The walls of his living room were decorated with dozens of posters of Kim. Plus a photograph he made of the popstar himself. Half of his victims were blondes who looked like Kim. When he was arrested his next victim would have been a Kim Wilde lookalike. Accoring to a police spokesman Joel was playing tapes of Kim when he was recently arrested. 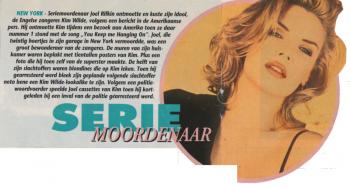