Until I was 20 I had little luck in love

It all happened in the year 1981, with 'Kids in America'. All of a sudden Kim Wilde was a star. And this while she saw herself as a background singer. Now, 12 years later, she has another hit, her 'Greatest Hits' album is released and, yes, believe it or not, 'Kids in America' is released again. In a house version. She'll be please with such a great jubilee.

'Yes, very much', she says smiling. Dressed in black leather pants and a red tight sweater she doesn't seem to have changed much in all those years. It's the fourth time I speak with her, and this time I reach the same conclusion as always: Kim Wilde is a blessing to interview. Her newest single If I can't have you is a cover from the Bee Gees. But since Kim Wilde sees herself as a singer/songwriter, the question arises: why a cover?
Kim: 'Why a cover? I will be honest, we wanted to release a greatest hits album for a long time, but we didn't feel confident after the mediocre success of 'Love is holy'. To launch the project we needed a big hit. And when we talked about it, maybe half a year ago, Rick (her brother) and I didn't have a feeling we wrote one. We just couldn't. So ultimately we decided to do a cover.A really good one. Then Rick's wife came up with If I can't have you. I've always liked the song. And I have good memories of it.

The original is from 'Saturday night fever', released in 1977. You were 17 then.
Then I was a real romantic girl. I still am. Every adult knows that when you don't meet your prince on a white horse, you take someone else. But at 17 you only want hím. And if you can't manage that, your world falls apart.

Who was your prince?
His name was John, and I still can see him clearly before me. Everyone loved him. He was very handsome. He just wasn't interested in me. He was more interested in a girl from my class. She was the most beautiful girl in school. But I couldn't take that, haha. Until I was 20 I didn't have a lot of luck in love.

Then you had your success. Have you ever seen him again?
Yes, I met him once afterwards, and I really had a feeling I got my own back on him. Although I still had some feelings for him, I didn't show it to him. That made me feel good. I never really looked at him. It felt like revenge.

'If I can't have you' is doing well. Especially in Germany and here.
Yes, it looks like it's going to be a really big hit, and that's great. I mean, we would have preferred to score with an original, self-penned song, but we just didn't have a feeling we had one. So...'

Three years ago you moved from London to th countryside, and bought a house there. How's it going with that?
I'm really busy with gardening. I've been able to pick the first fruits of my labour this year: my first apple and my first prune. They tasted wonderful. It was an enormous kick for me to get the first apple from the tree I planted. And there's grapes growing against my walls. So I've got my life on order now. Half of it is my career, the other half is a good life. The two are balanced.

With 'Kids in America' you were an overnight success. Now, 12 years later, we take stock: 12 years, 9 albums, 26 singles, 6 million sold albums and 11 million sold singles. What do you think when you hear these numbers?
The first time I heard them, I said to Nick, who's worked as my manager since the beginning: 'Nick, are you sure those numbers are right? Did you fatten them up for my biography?' He said: 'No really, Kim. That's how much you've sold.' And I was really surprised. Unbelievable. Okay, it's a long period of time. Some artists sell this much in a year, haha, and I took 12 years to do it, but still I think it's fantastic. And I'm really impressed.

When did you get the feeling you were a singer?
I suppose that must have been when I got my first cheque from Mickie Most, my record-producer. It wasn't long before my breakthrough with Kids in America. I wish I kept it. But anyway, he sat behind his desk, and wrote out a cheque for me. For session work as a background singer. I can still see him sitting there when he wrote out that cheque. It was 60 pound if I'm not mistaken. And I completely went out of my mind. It was the moment, it's great I have a job. That's fantastic.

What did you buy?
I think clothes. Because I was still living at home and didn't have a lot of money to buy those things. And I was still smoking, so I probably bought cigarettes as well, haha. But after that he wrote bigger cheques.

What was the story of 'Kids in America'?
Mickey Most was interested in my brother, not me at first. But I said to Ricky: "I really want to become a session singer. Can you arrange something for me?" So he did. That's how I ended up with Mickey Most. Sorry, what was your question?

The story of 'Kids in America'.
Oh yes, a producer, I forgot his name, but he was also working in the studio, saw me enter with my brother one day. He said to Ricky: "Do you know, your sister looks like a popstar. When I find the right song I'd like to record with her." That's how Kids in America[!] came about. Because Ricky thought 'If anyone writes and records a song with my sister, it will be me". So he went right back home, and wrote [!]Kids in America that same evening. A few days later we recorded it. We played it to Mickey Most. A few weeks after that it was a hit. It went really fast.

So it was all because your brother didn't want anyone else write a song for you?
Absolutely. I never knew this myself, he only told me this last year.

Fine, just in time for this interview. We are 12 years on: what's going to happen next?
God knows. I have no idea. I don't. I mean, there is an album beginning with Kids in America[!] and ending with [!]Kids in America as well, At the moment it's being remixed. And after the album is released it will be released as a single. One mix is already done, made by a couple of italians, the Rupino Brothers. Really great. Kim Wilde on acid. Absolutely fantastic. I love house- and dance music. You could say Kim Wilde crossed with 2 Unlimited or something. And this week another one is made. That one sounds even better, I think. It's done by a couple of guys who call themselves the Development Corps or something. They have something to do with the Cookie Crew. When it's done, we will choose the best one, and release it. It's a bit strange, it began with Kids and it ends with Kids. I have just made a video for Kids, last week. It was bizarre. We didn't even have the remixed version yet, so we had to work with the original. But next year the tenth album comes, and a new tour is planned for the end of this year. Of course Holland will be visited as well. 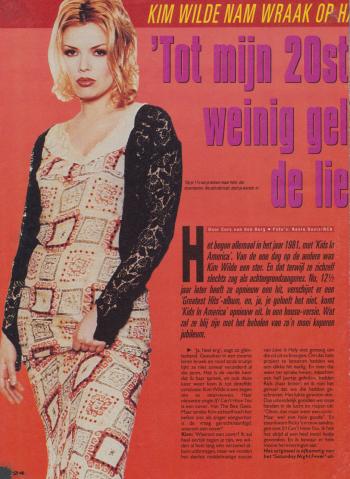 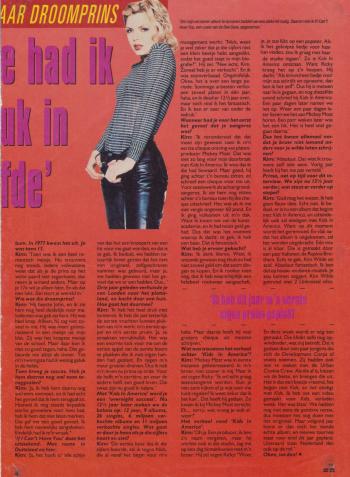