At the beginning of 1981, a nearly 20-year-old blonde named Kim Wilde emerged from nowhere with the likes of 'Kids in America', 'Water on glass' and 'Cambodia' as a female shooting star of the early 80s. The album "Kim Wilde" and "Select" brought her even more money and fame. The success-accustomed dream of all male teenagers has now become an attractive young woman who has crossed all heights and in recent years mainly the depths of the music business. Often enough, the sensationally hot media speculated that the star 'Kim Wilde' had finally faded - and promptly the singer rose again like Phoenix from the ashes.

Her last record "Love Is" once again fed the stream of rumours, because the album lay like lead on the shelves of the shops. Anno 1993 the anything but wild Kim is again on top.  Her "The Singles Collection" album runs as expected, and even the current single "If I can not have you" holds itself stubbornly on the charts. "I will continue to work in this direction - pop music with a tendency to dance rhythm. After I use more and more the technique of a keyboard while writing my songs, I am fascinated, and so is the change from "Checkered Love" to "Love is Holy" only natural. "

Also otherwise, the music in the British is a very relaxed way to emerge. The reason for this is their high degree of self-control. "I am contractually bound to my own company, have control over the music and my visual appearance."
She is well aware of her image of blond beauty and the resulting effect on the male part of the population. "I know that 50 per cent of the business depends on my appearance, I am a pop model, and I have arranged quite well so long as people leave me alone in my house in the country and do not expect me to be friendly on Sunday morning Tea, it's all right. As long as the job is really fun and paid as well as at the moment, the inconvenience is a pleasure. "
Says it and opens her blouse due to the increased room temperature in her silence.
Although otherwise quite professional, she sometimes gets lured out of the reserve. "Yesterday, I talked to a newspaper reporter, and he only asked me about private things, and since I'm basically very open, I only realized afterwards that we had not talked about my music at all, which really annoys me because I love my songs and I work hard on my songs, especially on vocal arrangements, so that the main note must already apply to my compositions. "
Such conversations may remain quite unimportant until the next studio album. 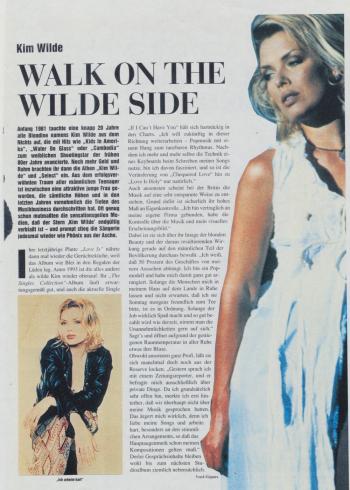