The lovely Kim Wilde is fighting back after her last album 'Love is' bombed. Kim is at peace with the world, as she tells Rock World's rather effete gossip columnist Lucian Fanshaw.

I found Kim cool rather than wild when we met over champagne and lobster at the Purple Prune recently.
"I want to continue in this direction in the future. Pop music with a tendency towards dance rhythms" said the winsome wench nibbling at a claw. As I looked around with increasing desperation for the wine waiter to help ease the tedium, she started trying to dazzle me with talk of technology.
"Since I have increasingly been using the technology of keyboards when writing my songs I am fascinated by it and therefore the change from 'Chequered Love' to 'Love Is Holy' is only natural."
Of course luvvie, but tell us all about the absolute CONTROL you have over your music and career...
"I am contractually bound to my own company, so I have complete control over the music and my visual image."
She is certainly aware of her image as a blonde beauty and the resulting impact on the male population.
"I know that 50 per cent of business depends on my looks. I'm a pop model and I have come to terms with that quite well. As long as people leave me alone in my house in the countryside and don't expect me to ask them around for tea on Sunday mornings it' s alright. As long as the job is enjoyable and is as well paid as it is at the moment you put up with the hassles."
Although somewhat circumspect in her observations, Wilde sometimes opens up, especially when one plies her with caviar. "I spoke to another reporter yesterday and he only asked about private matters. Because I'm normally quite open I only realised afterwards that we hadn't talked about my music at all. That really annoys me because I love my songs and like working especially on the vocal arrangements, so that the main emphasis has to be on my compositions." 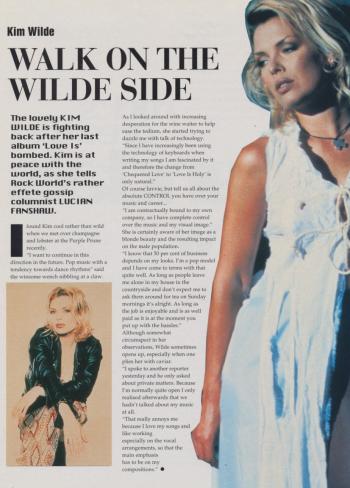