Over two years ago we met Kim Wilde for the third and last time. During that occasion we asked whether she wanted to contribute something personal for the readers of Top 10. And Kim wanted to do it. There was some talk of her contributing her earrings. The pair she was wearing - consisting of crystals - she didn't want to miss, however. "I got these from my grandmother when I turned 20", she says. "I can't do that! But I have another pair that is really special. I chose and bought them myself. I will find them and tonight they will be ready for you".
It didn't work out becaause of a lot of difficult circumstances. Kim looked very happy at the time, but that was really only a facade. Shortly thereafter the English singer had a breakdown, and you may have read that sad story in Top 10. But now Kim feels like she is reborn and during the renewed acquaintance we recently had, Kim kept the promise she made earlier.
"I bought them during my travels in a very good shop", says Kim. "I like the shape, those hearts, and especially the colour. In fact I've grown really attached to them..."
Do you want to win these earrings, which Kim has worn during special occasions? And also win a special wish written by Kim Wilde? Or a signed t-shirt? Then take your chance. Fill in the coupon below.

Did you know this?

It all started for Kim in 1981 when 'Kids in America' sold some two million copies. Kim became an overnight star while shortly before she was singing backing vocals for her brother. A copper jubilee for Kim Wilde!

When did you realise you wanted to become a singer?
That was when I was five. I grew up with music. My father, Marty Wilde, was a successful rock singer during that time. I loved it, I wanted that too! And I did my best in the church choir. I only felt like a real singer when I got a cheque from a producer for doing session work as backing vocalist. That happened shortly before I broke through with 'Kids in America'. That's when I realised I was really working in music.

Your father influenced your career, but your brother did too, didn't he?
That's right. Because of him I ended up doing music for a living.

Tell us how that worked out?
One day I went to the studio with my brother, where he was recording with his band. I met the producer there. He asked Rick who I was, because he saw something in me. He just needed to find a song for me. "Just leave that to me", said my brother then. The next day he came up with 'Kids in America'. Mickie Most, that producer, saw something in the song. We practiced and a few weeks later we had a hit.

And now you are a star. You're in a family business, aren't you? Your father manages Kim Wilde, your mother does public relations and your brother does finances. Is that going alright?
Yes, it's fine. At least you know you're in good hands, because your family won't let you down. It's great! I don't have to worry about a thing...

Are your faithful fans important to you?
Sure! Fans mean a lot to me. The ycan make or break me, after all. Believe it or not but I have a lot of different fans, not just young people. There are guys who are 50 years old stil enjoying my music. It's fun! I have to look out though, because I've also been threatened recently. There's someone stalking me and phoning me up. That's not very nice. Fortunately I get protection, but it does make me sick...

You have been working in music for 13 years. What are the most important changes your career has been through?
One of the most astonishing things in recent years was writing my own songs. In the beginning my father Marty and my brother Rick did that, but now I do most of it myself. When you don't write your own songs you get less involved. Writing gives me a very good feeling. It's a question of emotions. It gave me courage when I felt down. When I hear the sad songs I wrote years ago, the moments return to me. Writing songs is a bit like writing a diary...

What are your plans for the near future?
Soon there will be a remix out of 'In My Life', the song that's also on the cd 'The Singles Collection'. But in a different version. We have a lot more plans, like TV series nd maybe playing in a movie. There's also a tour planned. This year! I love doing live shows again. I've really missed that... 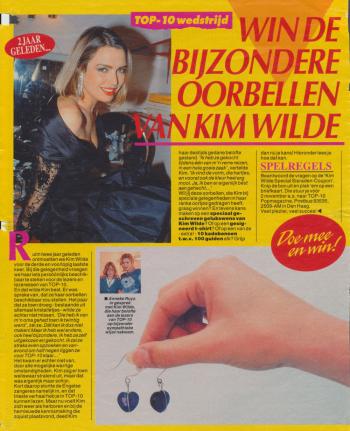 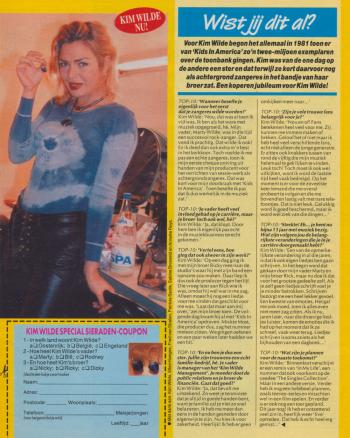