From pouting behind ventian blinds to whipping off her singlet to the tune of a Bee Gees song, Kim Wilde has been an exponent of chart-friendly pop for the past 13 years. About to launch into her first ever Australian tour, she considers her illustrious past and her exciting future from a hotel room in Japan. Sam Goodwin was there to take the call.

As the great acts of the video-driven '80s have lapsed into memory banks and compilation packages, there is one underdog that has thrived and sustained a career in a fickle business. Bursting onto Countdown screens post-Blondie, Kim Wilde appeared like Debbie Harry's little sister, singing about the kids in America, even though she was London born and bred. She offered polite rebellion, a glamorous teen alternative to the change-over from punk to new-romantic.

Plus, it was a family affair - Kim's dad Marty and brother Ricki had both experienced degrees of pop stardom, before investing what they knew into the writing and recording of the Kim Wilde catalogue, which now boasts gems like 'Kids in America', 'Chequered Love', 'View From a Bridge', 'Cambodia' and 'Rage to Love'. Of course, her arrival in the early '80s brought with it claims that she was just a bright package made and moulded by frustrated rockers. It's an issue she's spent over a decade explaining.

"They (Marty & Ricki) didn't have anything to do with the visual aspect of what I was doing. I'd just come out of art college and I had very definite ideas about my own individuality. I was wearing a lot of second-hand clothes at the time, because I didn't have much money, and I used to cut and dye my own hair... it was what I was. The thing I didn't do was song-writing - and people got confused. Because Marty and Ricki were writing all my songs, it was presumed they were pulling all the strings there were to pull. They weren't Svengali figures or anything."

Kim's popularity, especially in Britain, was remarkable, featuring prominently on chart shows and in pop mags, and influencing teenage girls everywhere to cut their own hair. For consecutive years, she came second in the Smash Hits Readers Poll Best Female Artist and Most Fanciable Female categories - attention she "really enjoyed, because Smash Hits was a magazine that up until that time I probably would've bought. Then, all of a sudden I was in it, picking up awards.

"It was important to me, but what was more impirtant was that I was actually in the business, doing what I was doing. My father, who's been a rock'n' roll man for over 20 years, treats it like a job, and I think I've inherited that attitude. Of course I was completely chuffed by all the success, but I was also very realistic as to what it all meant. I couldn't get overwhelmed by that sort of stuff, as I realise how transient those sort of awards are."

I mention that my favourite chapter of The Kim Wilde Story was around 1982, when she was singing songs with menacing introductions and grim plots - tunes like 'Child Come Away' (about the mysterious incident involving a battered woman); 'Cambodia' (the relationship between Thailand-based soldier and airforce wife) and 'Chaos at the Airport' (tarmac turmoil). It's a stage that Kim looks upon with similar affection.

"These were all inventions from my father's fertile brain. He would come up with these minor dramas. I didn't really appreciate them as much as I do now. At the time, I thought 'What is going on?' I was a bit hung up on what was hip. There wasn't a lot that was hip about what we were doing. At the time we were doing what we wanted to do."

While her early material reflected her love for bands like The Skids, The Clash, The Selecter and The Specials, Kim's real idols were singer-songwriters, people like Todd Rundgren and Stevie Wonder ("particularly the more introspective and religious stuff like Innervisions.") She was also a big fan of Joni Mitchell's, although her knowledge of that artist's repertoire comes to a halt "around the time of Wild Things Run Fast, although I thought the song she did with Peter Gabriel (My Secret Place) was really beautiful".

"As a kid, all of my heroes and heroines were singer/songwriters, so it's something that I had to try for myself. Initially I didn't mostly because I was so successful in the first few years of my career. I didn't really have the time to sit around and develop that talent."

The first time she dabbled in composition was on her third album, Teases and Dares (1984), the cover for which featured her sitting very awkwardly in Gary Numan cast-offs. "I was in a bit of conflict at the time because I didn't really know which direction to go, and it showed on the album - there was a real mixture of styles. We had a few hits on it, but they were so different from each other you'd think they were by separate artists - Rage To Love, which I think was a fabulous pop record, and The Second Time, which had more of a dance vibe to it."

While Kim has travelled since from dance cover to dance cover - You Keep Me Hanging On (1986) to the recent If I Can't Have You - she has managed to vary her material, at one point experimenting with a different producer, Rick Nowells, who had previously worked with Stevie Nicks and Belinda Carlisle.

"On that album (Love Is), I worked with a live band for the first time. Most of the stuff I had done with Ricki was keyboard oriented. The whole experience gave me a lot of confidence."

Local audiences can witness this confidence when Kim plays the Bridgeway this Saturday night. Apparently the show is "quite rock 'n' roll", which may come as a shock to those who know her as video pop diva. "I gave up wondering a long time ago what people expected of me - and I just do what I wannad do. That includes the recrods I choose to make, the videos, and the tour. It just turns out to be pretty raunchy. Everything's pretty punchy, pretty fast-paced."

This raunchiness is an element that has served as thread throughout Wilde's career, her pout and posturing leading to descriptions of her being a 'Sultry Sexbomb Starlet' in certain publications. The siren tag is one she remains untroubled by.

"I always thought that was part and parcel of being a pop star, and it is. I've always exploited and enjoyed it, because you can have a lot of fun with that. My idols were combinations of serious songwriters and people like Roy Wood and Gary Glitter and Elvis Presley - people who were using their sexuality and really having fun with it."

The greatest hits show we'll witness will feature "everything right back to Kids in America, and will include her personal favourite - You Came. There is one deletion from the singles catalogue, however - Child Come Away - which she tried rehearsing a few weeks ago, but could get her "head around". How disappointing! Following her shows here, and subsequent appearances in Bangkok and Singapore, Kim plans to return to Australia, to spend a month "just travelling around". Don't be surprised, then, if you see a woman who looks remarkably like Kim Wilde appearing live in your local deli around April. 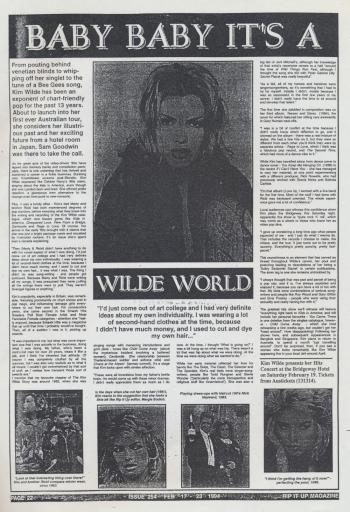