Dressed throughout in black leather, Kim hops like a rubber ball from the left to the right giant speaker, bats the lashes, paints a circle in the air with her palm, kisses for thanks with her pouty lips. She has become a vamp and no longer silly. Many could hardly believe it. Felt transported back to the teenage, as they were playing the revolving record, staring dreamily at the cover with the pretty blonde. Difficult to understand that the unattainable now actually stood there on the park stage in Leipzig: Kim Wilde in the east.

Hard to believe too, how she has stripped the image of the naïve doll, celebrates self-awareness and energy during her show. She slyly pulls the shoulders toward your ears, and a little embarrassed smiles enchantingly at the announcement: "We're gonna play some of the old hits." It sounds like an excuse. Because the old hits have to be served instead of the new disc, which has sold well as a successor guardian of the shelf "Love Moves". But the accumulated performance bonus has not been exhausted for a long time. Kim Wilde exhausted by the time up to the 90s.

The British woman hasn't been one of the "Kids in America" for a long time, which meant in 1981 the start of a long lasting triumph. And the dreamy record listeners today are lagging behind the age of their idol only a few years. Kim, meanwhile 34 ears old knows that and as she bewitches. Even the delicate double chin looks favorably considered charming. Only her giggles irritate. The mocker's will call it childish, fans will call it childlike.

Her fun during her appearance, at the almost familial atmosphere at the (not sold in Leipzig) stage is credible, is infectious. With every song they staged a coup on himself and the audience, singing her melancholy "Cambodia", shouting out their "Chequered Love". The mass rages and participates devotedly in the Super Hits of the 80s. The titles are not as Evergreen to be played on every radio station across the ether, giving the fans an opportunity to catch them now.

Kim bathed in enthusiasm, charm pulls all registers. She tried to enchant the heart of a nine year old in English-German dialogue, and not forgetting the older fans. Makes the stuck up hair falling in her face, the leather jacket thrown away, support the drum beats with twitching  fist. The audience throw up the arms.

Hard to comprehend that it must be over soon and will. Elusive that Kim Basinger of pop is ripping away the summit where she stood for years. Not fast, in a roundabout way, but still. Where a wrinkled Joe Cocker as a walking monument still attracts a crowd, the Wilde one has to live with the curse that female popularity is always associated with volatile beauty. The stages get smaller, the audiences less vast, the atmosphere intimate. But she still lures, rocks, hops, she giggles and flirts. She is still right when she asserts: "I'm the wild one." 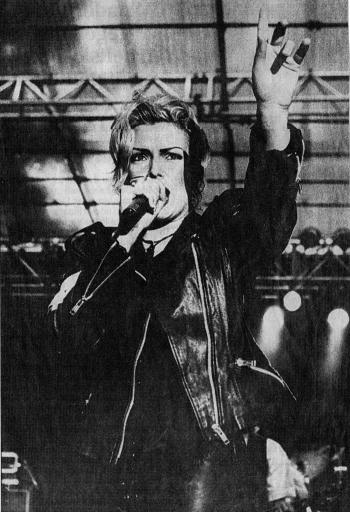