After more than a decade as one of the most successful pop artists the UK has ever seen, Kim Wilde needs no introduction. Yet despite her high pop profile she's only just embarking on one of the first major tours, and the playing live in Australia for the first time.

Kim is energised for her Australian dates, having just played to wildly enthusiastic crowds in Japan, where she says her reception has been similar to that she's come to expect in Australia.

"There'd be periods where people would think I'd completely stopped making music forever and during those periods I'd be making loads of music and doing stuff in Europe, but no one would know; and then there'd be sporadic success over the years. It's kind of become consistent over the last few."

One of the major factors for Kim's high profile in the region recently is the fact that she's been here regularly promoting over the last year or so. And now with the release of a remix album of her greatest hits we'll no doubt be hearing a lot more from her. But why do a remix album on the tail of a successful greatest hits release?

"I didn't really have a lot to do with it", Kim explains. "It was just an idea of putting together some mixes that hadn't been released and the one that I really loved was the Rapino mix of Kids in America. We've been getting remix projects on it for the last six months and we haven't been really completely happy with any of them, except for the Rapino one, and we're working on getting another one for release in the next month or so. Capella are doing a remix at the moment, which could be interesting or it could be really dull. I was talking to Green Jelly and they were up for doing one as well, which would be a totally different approach."

And while they're gearing up to re-relase Kids in America, 1990s style, Kim says she and her brother/writing partner/producer Ricky are also planning on putting together new asongs for an album to be released later this year. But first there's the matter of a tour, which Kim says is the definite highlight on her calender so far this year, because playing live is a relatively rare experience for her.

"Unfortunately the reality of promotion is that time is short and if I'm promoting all over the world I can make a much bigger impact by doing more conventional promotion... which is a bit dull actually 'cause

was when the Close album was released, and she was opening for Michael Jackson. "We were on the road for a period of three months and we did about thirty odd shows and that's where my live work really gelled for me. I've done a little bit since then over the years but I have to say that in retrospect we should have done more, and I wish we had in a way but we're making up for it now."

As a result, though, Kim says she is still enthusiastic about playing live, where "a lot of old seasoned pros" can't be. And with a band that includes her brother and a handful of other musicians she's worked with over the years, Kim says that their live shows are something special, with a repertoire of songs that represent the span of her career.

"There's not a great chasm between the old and the new", she explains. "The approach of the band and the way that they're playing and stuff it all sounds really good together."

Kim agrees that she has always been performance-oriented and loves putting on a show, which could see her taking up options other than just being a pop singer.

"I still feel really energised by it and I still love music and I love performing", she says. "I would like to broaden it out a bit more. In the UK I hosted a live breakfast show for a week which was a really great experience, and it was very impromptu and I really enjoyed it. And I though if I can do that, I can pretty much do anything so I feel like taking on lots of new challenges. I think at some point you have to realise what your strengths are and not only that, but what you enjoy doing. Some times I fantasise about having some regular work where I don't have to worry about my hair and my weight and coming up with something smart to say, but over the years I've had to accept where my strengths seem to lie and make the most of them and enjoy them, and not fight it. I think the most important thig for me right now is to keep my eyes open, keep my ears to the ground and use my imagination. And that's what I'm starting to do and things are already starting to bubble." 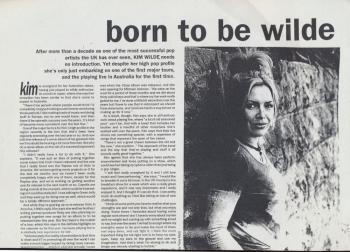