Kim Wilde's blue Bambi eyes are moist, while she stares sadly into the cup of coffee directly before her perfect nose. She is pressing back the tears, and it's as if the whole restaurant wants to take this poor being in the arms. She is beautiful, blonde, has a good figure, is pleasant and intelligent. Probably she is already a millionaire. She says that people get along with her easily. Kim Scorpio - balanced, faithful and affectionate. So why is this 30 year old without love? Why does she - the perfect woman - have to spend Christmas and New Year alone?

She finds it hard herself to solve this mystery, and while she tries the coffee with interests she says that her main goal is to get married and have children.
She can't hold back her tears now and reveals that the romance with her longstanding boyfriend Calvin Hayes from Johnny Hates Jazz has been broken off, just like her shorter affair with the TV producer Chess Evans.
It has hit her harder than she likes to admit, and the pain hinders her to talk more about it. "It's not the first time", she says, "and who knows what the future brings. Maybe it's an accountant, why not, it might be a change from those musicians. It's important that he has humour. Good looks are important, to start something with someone." But, as a warning to all the goodlooking comics: "It may only get you an invite to dinner, a lot of other things are important, when you want to come any further with me", says Kim, the vamp once again.

Maybe the fame and her raw stage image have held back probable candidates - for instance those accountants. She does not repent this, and she is honest enough to admit that her skintight leather clothes, seductively exposed bosom, her blonde hair and her scarlet pouting lips have been her recipe for success during the last ten years.
Now she has said goodbye to this outfit and has chosen a more designer look. Maybe a little less sexy, but more chique.
Kim explains: "Every woman is in touch with her own sexuality, and I think it's good. It is an important part of life, that should be fun. I won't say that I wasn't aware of my sexuality, and that I have used it when I needed it. I liked my looks and it fitted with what I was doing. My music has developed, away from poprock, and now goes more to the soul-ballad territory. I write about my deeper feelings. Things that have made me happy or sad pop up in my songs, but I never write about specific circumstances or persons, that won't be fair, treason even. I have to admit that I get sad when I hear my own songs, the ones I wrote four years ago. It takes me with them, it brings back memories."
Kim sees the future of her musical career more in songwriting and is always looking for the monster hit... performed by someone else. She dreams of getting on stage to get a Grammy award as a composer, not as performer.
"I believe that things didn't start with my family being in the music business, but with the poems I wrote as a schoolgirl. They were love poems for the boys I was crazy about." 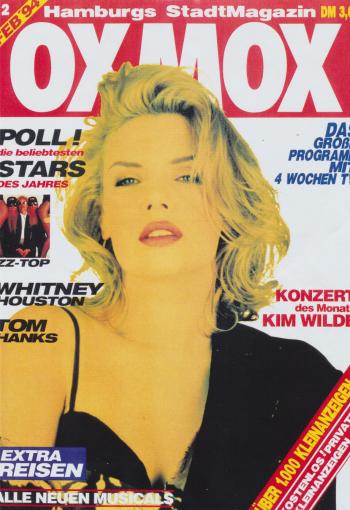 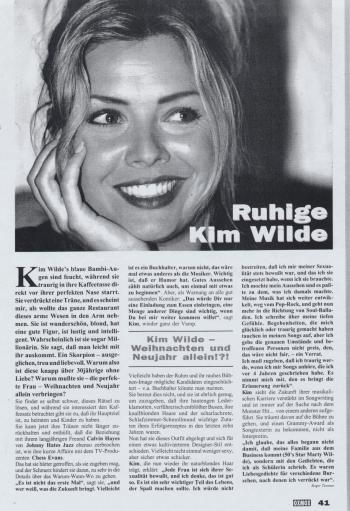