It seems hard to believe but though she's been having hit singles and high-selling albums in Australia since 1981, Kim Wilde has never actualy visited Australia to perform, apart from the odd appearance on TV variety shows and awards nights. She's been promising for years that she would, but circumstances have ended up getting in the way each time. But the 13 year wait for Wilde fans is finally over, as Kim prepares to visit Australia for a series of concerts, with a full band and more than a decade of material to draw from.

At the moment, Kim's in Tokyo, and proving a little hard to find. The number provided for the interview turns out to be a fax machine, and so we ring around Tokyo, enjoying what sounds like the 'Bladerunner' soundtrack on hold at one hotel (the wrong one) befpore finally tracking the correct hotel, and Kim, down. (This hotel prefers to inflict 'Greensleeves' on hapless callers while on hold.) She's in a good mood - she's never played Japan before either, and it's going extremely well.

'I've just done my first dates here in Japan after 13 years, which is bizarre', says Kim, 'and he same thing's happening to Squeeze as well next week, who also play here for the first time...! I did a gig in Osaka, and it was really good - small venues, up to about 1000 people, and it was great. We were in Europe the week before, and this is the first tour that I've done that's actually been my own tour for quite a long time - I feel really great about that. It's wonderful when you turn up and you know people are there just to see you. The last extensive tour I did I was opening for Michael Jackson and it's just a different vibe.'

The show that Kim is bringing out to Australia by way of Japan is being billed as 'The Hits Concert', tying in neatly both with her Greatest Hits album and the fact that, well, she's never played here before, and fans who've been expecting the older material are going to get exactly what they want. 'It's fun, definitely. This is a Greatest Hits gig, so the emphasis is on having a good time, having fun and enjoying the hits which are predominantly very pop and rock. So we just go the whole way and don the black leather trousers and go mad!'

The band touring with Kim - no backing tapes here, thanks very much - include many of the same musicians who worked on Kim's albums, not the least being Ricky Wilde, purveyor of the Wall Of Doom Keyboard Sound.

'I've got a shit-hot band', Kim enthuses. 'My brother is in the band, which is fantastic for me, I love that - I don't think many people get the chance to have their producer and writer in the band! They're a great-sounding band... we run through all the hits from 'Kids in America' right up to 'If I can't have you' with a few surprises, a few album tracks that I love. But it's pretty high energy, really, a high-energy rock set, and there's a lot of banter with the audience which is fun. It's a great band, too. It's the best band I've ever had.'

Of course the obvious question that many have been asking is, what took so long? 'It's always been timing, stuff like that. Viability of live work versus promotion... I think in the past there has probably been a bit too much emphasis on promotion, and I would concede that it is one of the areas where some good judgement wasn't made. So I'm just going to have to make up for it now.'

And as for THAT keyboard sound? 'Yes, definitely - Rick's Wall Of Doom Keyboard Sound is well and truly there! Everything is very true to the records, but maybe a bit heavier, mainly thanks to this monster-hitting drummer we've acquired...'

In terms of a new album, expect something somewhat different but expect to wait a while - Kim hasn't started yet, mainly due to the aforementioned publicity schedule that's taken almost all of her time since the 'Love is' album. 'Everything's been put on hold for the time being  - I'm not going to start writing again until I get back from Australia, which won't be until the end of March, so I'm anticipating and album for the (UK) Autumn. There's a lot of new ideas that I can't talk about just yet, a lot of new ideas for the album. It will be perceived as a big change. But no concept albums yet!' 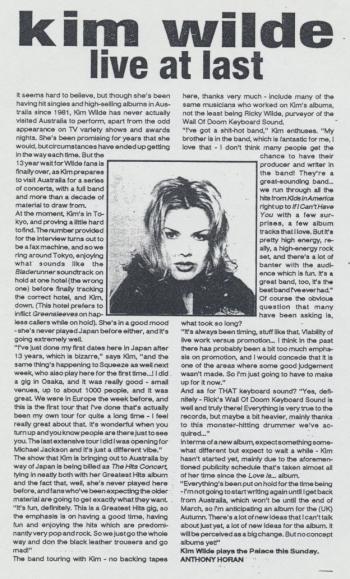