You had to wait for it for months but it's finally happening: on Monday February 7 Kim Wilde gives her first concert in four years in the Netherlands. It will take place at Muziekcentrum Vredenburg in Utrecht. The concert is part of her 'greatest hits' tour, following last year's cd with all her big hits. You will have to wait for an all new album of the singer. Last year Kim told BlizzKids: 'Together with Simon Climie (from the now defunct duo Climie Fisher - ed.) I am writing new material. But it's not going so fast. There are a few songs ready. They are real album tracks. Single candidates are not there yet.'

That's why Kim Wilde recorded a cover of the Bee Gees song 'If I can't have you' that made her end up in the European charts in no time. 'I still prefer performing above all', she said back then as well. 'You get an instant reaction from the audience';. Once she was described as a singing barbiedoll who had to benefit from her looks. 'Nonsense. I'm in the business for over ten years. When it was based on my looks I would have lost fans in time. I won't deny using my looks but without good songs and a good song you would quickly be found out.' 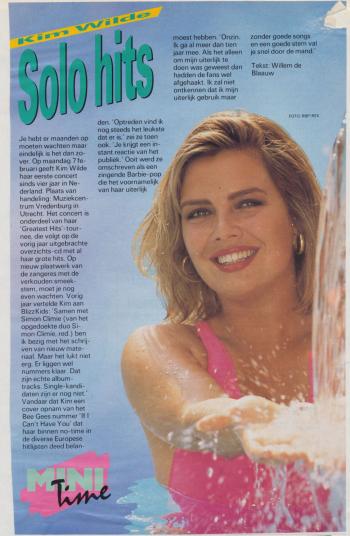