The wheel has come full circle for Kim Wilde. Thirteen years after her debut single 'Kids in America' stormed into the UK top 20, the singer looks set to release the song again.

Wilde, speaking from Japan on Tuesday, said she was collating remixes for an unconfirmed re-release of the single that in February 1981 saw her line up in the charts alongside some of the big names of the day: Adam & the Ants, Ultravox, The Stray Cats, Toyah, Rainbow, Shakin' Stevens and Madness. Some critics suspected her career might prove to be as long and illustrious as that of Joe Dolce, perpetrator of that month's number one 'Shaduppa Your Face', but the overnight sensation has outlasted them all.

With sales of more than six million albums and 11 million singles, Wilde is now the most successful British female solo artist of all time. The singer, who plays Metropolis Concert Club on Wednesday and an all ages Teenage Rampage at the Concert Hall next Thursday, comes to town on the crest of a wave.

A stunningly successful 1993 has resurrected her career after some indifferent years. A number one single 'If I can't have you' and a successful singles album have made Wilde headline news again and she's enjoying the attention. "I have had a lot of success there (in the UK) but none for quite a while, so it's been a rea lego massage to say the least", says the singer who lives near Stevenage in Hertfordshire.

"It's great to have success anywhere, but especially for me here. I have to face the postman and the local shop people and they are always asking how I'm doing. 'Ooh Kim, I haven't seen you in the charts lately, dear'," she mimics in a Pythonesque falsetto. She can even laugh at the tabloids which link her with a toy boy on the ski slopes one week, "well, he was over 20", (Wilde is 32) and a TV presenter the next. If you believe half the gossip columns, it's a bit like 'If I can't have you I'll find someone else, no problem.'

Much of last year was devoted to Wilde's pet project, 'The Singles Collection 1981-1993'. The singer was involved at every stage, even down to choosing the photographs used on the CD sleeve. The timing of the hit single could not have been better for the album push. "Success in this business comes down to a lot of luck, timing and hard work. Obviously, I'm chuffed with 'If I can't have you' and it sort of relieves the pressure"< she said.

Pressure was not something Wilde knew much about in the early 80s as she enjoyed a succession of top 20 singles: 'Chequered love', 'Water on glass', 'Cambodia', 'View from a bridge' and 'Love blonde' and big-selling albums 'Kim Wilde', 'Select' and 'Catch as catch can' culminated in a 1983 BPI Award for best female vocalist.

In 1984 she signed a worldwide deal with MCA Records and the hit singles kept on coming: 'Second time', 'Rage to love', 'Another step' - the first of her own compositions released as a single - and 'You keep me hangin' on', a number one in Australia, the US and Canada. But the pressure to keep churning out the hits finally took its toll. Wilde's ballooning weight was just one symptom of her unhappiness. About the mid-8u0s, the top 20s turned to top 40s or worse. "Initially I didn't cope very well. These days I'm much better", she said. "But when it came to the crunch, I had no intention of relinquishing what I had got. So, I just worked very hard in the areas where the projects were still working and concentrated on the places where I was doing well. Historically, my biggest markets are in France and Germany. The French took me to their hearts after 'Cambodia' and haven't let me go. I also developed my songwriting which has been a great asset to my career. I just kept pluggin gon. It's very sweet to succeed again."

'The Singles Collection' details Wilde's development as an artist. Her family's background in the music business made singing a natural choice for the teenage Wilde, who started off as a session singer. "Virtually the whole of side one is written by my brother and my father. Marty doesn't really write much for me anymore but I still write with Ricky and Ricky produced me. It's still family as well as other people - it's not completely incestuous. But I think the family influence has been an incredibly positive thing. It's been a big boost to my career and a lot of fun. There's a lot of pressure working with one's family. It hasn't been some sort of Waltons trip, we've had to work very hard at it. But I'm grateful that it's brought us together rather than torn us apart."

The second side bears testimony to the singer's growing confidence and willingness to pursue other collaborations. "When I first started writing nine or so years ago I was actually writing with my guitarist Steve Bird and we wrote the hit 'Another Step'. Now when I start my writing projects I always start with him because we always seem to come up with something I like."

Wilde plans to have a new album out by the end of the year. She has been coming to Australia since the early 80s for promotional tours but this will be her first concert tour. 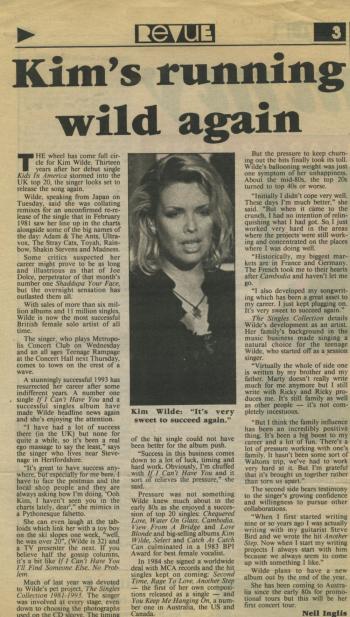