Sexy Kim Wilde made her debut on the pop show in this edition, dating back to 1981.
Wearing a skin-tight black number, she belts out Kids In America, which shot into the Top 10 as a result.

The stunning singer has stayed on top in the pop world ever since. Kim has also hit the headlines off-stage, most recently for having dated Big Breakfast presenter Chris Evans.

This Top Of The Pops was broadcast by the Beeb two months after John Lennon was shot dead outside his apartment in New York. The hits on parade are certain to bring back memoreis of Lennon's tragic death. Two of his songs, Woman and Imaine, were in the charts, while Roxy Music had also produced a glorious tribute with a cover of Lennon's Jealous Guy. The video is featured on the show, with Bryan Ferry looking his usual supercool self.

Watch out for the video of Ultravox's Vienna. It's all black and white shots of sexy models.

UK Gold say this re-run series is one of their great ratings-pullers. It's easy to see why. 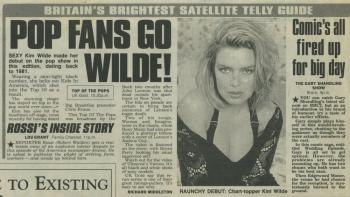