The peaks and troughs of Kim Wilde: 'There were periods when I thought I was going mad'

It's 13 years ago already that the 21 year old artist's daughter Kim Wilde debuted with 'Kids in America' and stormed the international charts. Now she has collected all her hits on a 'Best of' cd and late last year she sang 'If I can't have you' to the top of the charts. At first it seems like everything in Kim's career was coming up roses, but there were many peaks and troughs. Together with Kim we look back once more...

'I think there is nothing that I regret in hindsight', says Kim. 'If I had to do my career all over again, I would probably do exactly the same things. I only regret not having started doing fitness earlier on. I can hit myself for not having started when I was 21. I've been doing it only over the past few years and I notice it makes such a lot of difference. I have a lot more energy and I think I look better as well. But aside from that I'm pretty satisfied about my musical career. I haven't done any big dramatic changes in style, but I've started writing songs myself and I've only had one mission all through this time: looking for the perfect pop song. I'm still doing that.'

What kind of expectations and dreams did you have when you started 13 years ago, and have all the dreams come true?
In my early teens I was 100% sure that my life would be devoted to music. Strangely enough I didn't dream of becoming a pop star. My ambitions were far more modest, I wanted to become a backing singer. My mother had done it in her brief career; she stopped when she was pregnant with me. When 'Kids in America' became a hit, a song that had come about really by accident, my fate was sealed. I didn't have a lot of say in it; becoming a popstar wasn't a conscious choice I made.

Your brother Ricky was supposed to sing it?
Yes, he was the one with the record contract. The people from the record company had never met me. I asked Ricky whether he needed backing vocals, and that got the ball rolling. Micky Most, the producer, saw me and felt that I was more fit to be a popstar.

And then you get famous from one day to another. How does it influence your life?
I just finished art college and I was up for it. All my teenage life I'd wanted to sing. It was a relief for me that I could finally become a professional singer and earn a living with it. It was very nice not to hold up my hand at home anymore and earn my bread for myself. I enjoyed it fully. I was suddenly spoilt rotten. I flew around the world, had a lot of fun, met a lot of other popstars like Madness and The Police, in short: it was a big party.

And after that?
Then there was a lot of pressure on my brother Ricky and my father Marty. They had to keep making hits. They were successful at first, but with the third album they couldn't cope with the pressure anymore and they weren't capable of writing the right songs for me anymore. That was after 'Love blonde'. It was a very difficult period, but it was good for me because I started writing songs myself for the first time. It changed my view of the music business and myself as an artist. Until that time I was looked upon as a pop bimbo, a brainless blonde who had little more to offer than a pretty head. I didn't mind being treated like that, but then I thought: there's only one way to change the opinion people have of me, and that's writing myself. So I did.

Why only then?
Before then I simply had no time. I was constantly underway, had absolutely no time for a private life and I was in the merry-go-round of success. There was never time to develop myself and to do the things that would make me a lot happier.

Were you unhappy during that time, then?
Well, I don't know. I don't have any regrets. It was a period in which I couldn't have a relationship with anyone. I didn't even have a private life. It only happened when I moved to London and that helped a lot. I think I needed it to get some self respect. It's easy to be a pop star for a while. I needed a challenge and that was composing. After that difficult time we signed to a different record company and had a huge hit with 'You keep me hangin' on'. Since then it went off again. The album 'Close' became my best selling record and I was invited to do the support for Michael Jackson. That was in '88. My career was blossoming like never before, but I also went through deep troughs. The success will never go to my head, because I know from experience it can be over like that.

You once told me you seriously considered stopping?
Yes, I think everyone in this business considers that at least once a month, certainly when they're so busy. It's hard to keep your confidence, because that is usually rammed out. In the beginning I had big problems with that, but now I have a lot of confidence and I am more relaxed.

Why is that?
I approach my career differently, with more humour. I don't get so angry anymore. In the early days my career was all I had. That and my family. When you're fixated on something, it's almost impossible to stay in a sound mind. There have certainly been periods when I thought I was going mad. I was working and working, too much and too often and I forgot to live. I forgot to stay home, bake bread, having a boyfriend... Well, I did have boyfriends but only when I could fit them in between work.

When did the moment come when you said: it's going to change?
That was the day I decided to move back to Hertfordshire, where I'd grown up. My flat in London was never more than a hotel room to me. It was not a home, but I lived there between '84 and '90. The day I left London, my life turned a 360 degrees. I now have a lovely home, close to my family. I have a beautiful studio and still the same friends with whom I went to school. My house is a real home now and my life is balanced. It means I like my job a lot more now too.

You're now totally different from the person you were in the eighties?
Yes, back then I was full of doubt, always doubting myself. I didn't want to give myself a chance and after I'd been famous for six years, I started selfdestructing. I didn't believe in myself anymore because of the constant attention from the press and the disappointment of records that weren't selling. A terrible feeling creeps up on you: you feel like a failure.

Did you really have that?
It happens automatically when your records flop. It's a strange thing when you work on a record for a year and no-one wants it. Especially when people did want them before. It happened a couple of times during my career. The worst time was just after the million selling album 'Close'. The record after that did nothing, while I was so proud of it. As a person I wasn't strong enough to just accept that. I wasn't firmly in my shoes enough to reason through that in my mind.

Is success still as important to you?
Yes. I think it's a kick to be in the commercial pop race. My urge to make the perfect pop record is stronger than ever. Also I am still in love with the whole rock and pop scene, even though there are a few aspects I really hate.

Such as?
Like all the VIP stuff. I will never act like a star, even if I seem to be seen as one. They ask me for every party, but I never go. I don't want to be a publicity seeking celebrity.

You must have had an offer from Playboy?
Oh yes, I could have been in every magazine, and seen with every celebrity. I hate that aspect of fame.

'If I can't have you' - did that ever happen to you too?
Often, but once it was dramatic. Very painful. I was in love, and thought it was reciprocal, but it turned out not to be so. I was fairly successful at the time, but I still got rejected. It was very hard to hide those feelings of rejection. I was living in a fantasy world at the time. I made up love affairs and said, okay, this is him, this is the one I'm in love with. When you think like that, it's obvious you get a bump in the head. Now I'm happy. I've made a few mistakes, but I do have a steady relationship.

Men see you as an object of lust. How do you cope with that?
I never saw myself that way, even when I was 22. Especially lately it's hard to keep hold of that status. I am 33 and sometimes I feel old. I am still younger than Madonna. But okay, if I'm exciting for men, that's flattering. I don't really pay attention to men looking at me. 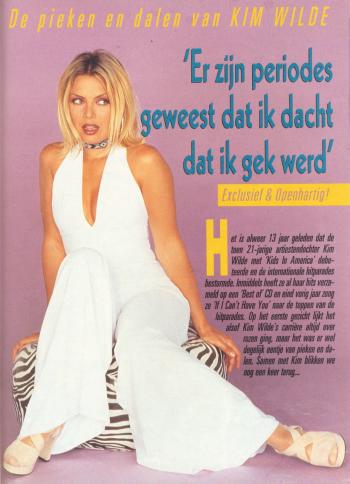 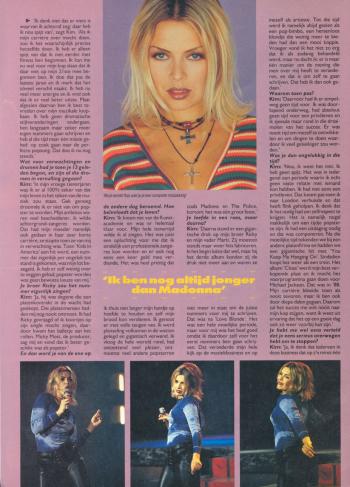 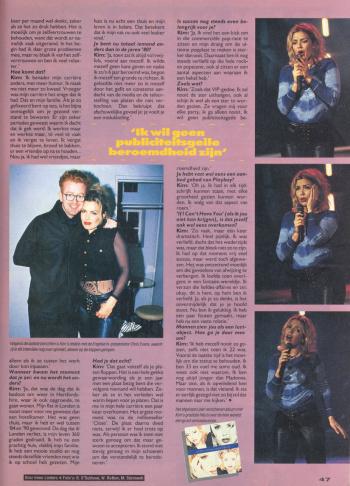