Heartbreak Kid Alex Dimitriades made an embarrassing play for her at the Australian Music Awards last year. It was cringe-under-your-seat material, but, funnily enough, it remains one of the only memorable incidents in the whole ceremony.
"Kim, do you know what it's like to admire somebody, I mean, really admire somebody from afar", Dimitriades mumbled at her. (It is not actually known whether these lines were on the cue cards). "No Alex I don't", Kim Wilde, born-again pop idol, declared dismissively.
That apparently set the tone for the rest of the evening. Dimitriades trailed Wilde like a puppy dog but, at the end of the niht, went to his hotel room without the bone, sort of.

So what's the story?
"We're just good friends", Wilde laughs. "We met at the awards ceremony, but I also met Kimberley (from failed bimbo group Rhapsody) and Eden Gaha, we all formed a group and had the best fun. We are all big friends and I can't wait to see them all again."

Especially Alex?
"Especially Alex", Wilde laughs.
Wilde is getting used to teen adulation all over again. She was a pop star in the '80s with Kids in America and Cambodia and now, following the massive success of If I can't have you, a filmsy cover of an Yvonne Elliman hit, she's touring the world.
"I haven't found that the fans are from any one age group", Wilde says. "The shows we've played in Europe and Japan, the fans are from age groups right across the board. I don't worry about it too much anyway. If people can accept me for who I am, then fine, I don't care what age you are."

What is success like the second time around?
"It's great and I'm able to enjoy it more. I'm much more confident about everything. I don't take myself nearly as seriously as I did when I was 21. I'm more chilled out. It's not the be all and end all. And I'm not doing this tour because I have to furiously promote something. I've already done well with the album, it's gone platinum in Australia. The key to this tour is, we are doing it because we really want to do it. I'm enjoying my success more than I ever have."

Wilde says she doesn't notice great differences in the industry over two decades. To her, pop culture has always been image-based.
"It goes right back to Elvis", she says. "That will never change. Image is something you can have an enormous amount of fun with. I think the danger is when it starts taking over from the music. You have to keep a balance."

Do you have to use sexuality more in the '90s?
"I did quite a bit of that before the '90s", Wilde laughs. "When you are a more confident, older woman, as I am now, those sorts of things are not at the forefront of your mind. You just be who you are. If that comes across, great. If it doesn't, tough."

Wilde says the live show covers her career from Kids in America to the last single In my life. Her brother, Ricky, who writes and produces for her, is in the line-up. There are seven people on stage.
"We've been on the road a couple of weeks now, so it's really rocking", Wilde says. "The band is really cooking right now, so you're getting the best of the tour. It's fun, up-tempo and noisy." 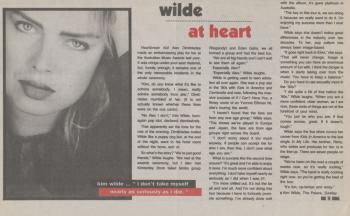