Kim Wilde, the beautiful, British songstress who took our national media by storm last November with her appearance at the Australian Music Awards, returns to give live audiences a taste of the Wilde magic throughout the latter half of this month. With Kim currently warming up the vocal chords in Japan, Time Off's Mock-E managed to snare a few minutes of her valuable time.

Kim Wilde's recently released Singles Collection 1981-1993 is a twelve year retrospective look at the staying power of a supposed "one-hit wonder". From 'Kids in America' to 'If I can't have you', Kim Wilde has, certainly, proved the "wild" card in a deck full of fickle audiences and industry machinations where the sink-or-swim philosophy has meant that Kim Wilde's head has remained well, and truly, above water.

From her beginnings in 1981, Kim Wilde has, practically, had music swimming amongst her genes. Her father, Marty Wilde, was a famed rock star of the 60's and her brother, Ricky, was performing in the 70's. Together, they wrote the song 'Kids in America', Kim recorded the vocals and she hasn't looked back since. Last year, on the release of the Greatest Hits package, Kim Wilde included two new singles including her cover of Yvonne Elliman's 'If I can't have you' which the Top Ten couldn't get enough of. Now, in two weeks time, Wednesday, 23 February, Kim Wilde brings her Hits concert concept to Festival Hall.

With twelve years under her belt, Kim Wilde has spent most of those either recording or doing promotional tours with a few live performances thrown in. However, with Michael Jackso na fan of her 1986 cover of the Supremes' 'You keep me hanging on', she found renewed life on the stage. "I haven't done an awful lot of touring over th eyears. The most I've done really was in 1988. I did a preamble to the Greatest Hits with the Michael Jackson tour. I knew that it would work. I was just excited to get it all back on the road. The Jackson experience, for me, was a turning point. It made me realise how much I love being on stage. Prior to that, I wasn't convinced. I thought I liked it, a bit, but I wasn't sure how much I liked it. At the moment, I'm doing my first concert ever in Osaka, Japan. I've just been in Paris, Holland, Britain and Germany and we did some really great gigs there. We're doing everything right back to 'Kids in America'. It's a pretty rocky uptempo set. It's a lot of fun with all the singles from the beginning and some selected album tracks that I really like."

Her performance at the Australian Music Awards, last year, at Dreamworld was one of the most spirited. It was obvious that she was going to have as good a time as any one of her fans. Kim Wilde's ease on stage is achieved by surrounding herself with close friends while on tour.

"I like to surround myself with people that I've worked with before. The tour manager who's here is from Newcastle and I've worked with him for ten years now, on and off, when I've done live dates. They're all top musicians and the hottest ones I could muster. My brother's in the badn which is great. To have your own producer and songwriter in the band is pretty rare and he does keyboard and guitar. I also have my guitarist, who's been my guitarist right from the word go and I'd hate to do a tour without him. I also write songs with him. They're all very versatile and into Rock, as well as other styles. The show itself is pretty versatile and high energy. Rock-orientated. I don't know, but, Rock's not really the right term to use; Rock, Pop, Dance. I hate putting labels on music."

The other new single released last year was the song, 'In my life', which was co-written by Kim and her brother, Ricky. Twelve years of recording and the back catalogue, now, includes covers, songs written by her father and brother and personally-penned numbers. However, it hasn't always been easy trying to get people to take her seriously, that she had the talent to write her own songs or tha tshe could do it successfully. A new album, full of material in which Kim's had a hand, is on its' way, maybe not soon, but, sooner than later.

"Some people perceived me to be a puppet having my strings pulled by my father, by Ricky and by Mick. I had a real taste of smugness when 'Another Step' was released (1986) and a great deal of satisfaction when my songs cut it commercially. The achievement of writing and having it accepted is terrific. I've written loads of stuff over the past nine years and, now, I'd like to put out an album of originals, but, I don't know if it'd be the next album or not. If I feel that my songwriting is good enough at some point, then, in the future I'd definitely do that. I love co-writing, though, and that's how I enjoy creating music. I've written with my brother ,my guitarist, Tony Swain and with lots of different people. I find it more inspiring and I find that it usually brings out the best in me and them. Some collaborations work well and some don't work so well, so, I'm glad that the work between me and my brother has always been really good. It's always a buzz to find someone to work with."

Kim Wilde's attitude is both self-defacing and honest. Her obvious joy in performing, in discoering the pains and joys of song-writing, in simply making the type of pop music that makes people happy is refreshing. She has nothing to hide and, willingly, presents everything warts and all. Her Greatest Hits album and tour are looking back over a successful and continuing career where acts often fall by the wayside. Festival Hall will be a night of pop dance when Ms Wilde unleashes her Hits weapon. 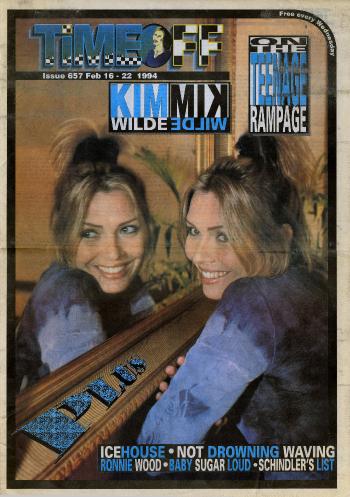 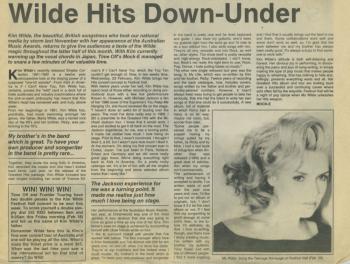