The late Patric Walker's observations were spookily accurate. In today's You Magazine Kim Wilde's horoscope readss, 'Recent events have taken their toll on you financially and emotionally, but there's no need to wash your hands of a deal that has the potential to revitalise your life.' Well, phew! ... Uncanny! For the last fortnight has marked the return of Kim Wilde - daughter of Marty and Joyce - to the pop scene, via the release of a new album Now And Forever. But the jaunty bottle-blonde who made her name in 1981, claiming to be a kid from America (she was, in fact, a nice young girl from Hertfordshire) has had a rough ride of late. Insecurity about her fading career led to excessive comfort-eating and an intake of alcohol that went well beyond the recommended weekly 14 units. Her love-life soured as she left her student toy-boy Rupert Kenyon for carrot-topped DJ Chris Evans, only for Evans to disappear with ex-model Rachel Tatton-Brown. Now, though, clean living and regular gym sessions have left her fit, healthy and alluringly slender. She wears a T-shirt marked 'Pop Star' to go shopping in Tesco. We can only hope she never has to replace it with one that says 'Former Pop Star' instead. 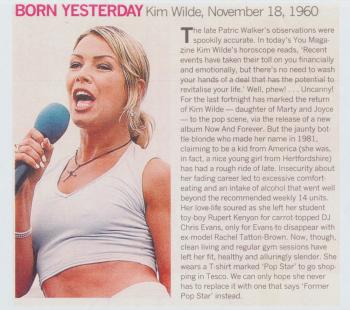