Men's looks don't matter most to Kim Wilde - personality's the priority. So it comes as no surprise that wacky Chris Evans swept her off her feet and made a lasting impression.

Sexy singer Kim Wilde still carries a torch for Radio 1 hotshot Chris Evans. Since last year's very public bust-up, the dream duo have privately kept in touch, and those closest to Kim are hoping for a rematch. Speaking frankly about the men in her life, she confides for the first time how the carrot-topped whiz kid laughed his way into her heart. "I don't know if anything will happen in future," says Kim, 34, "but there was aiways a good feeling between us and aiways will be. Chris is very special."
Kim, who's enjoyed the softer side of men, continues: "I've been lucky in that l've had some wonderfully romantic things happen in my life. I won't say whether they involved Chris but I can reveal that he has never nibbled my toes."
Evans is hardly a regular hunk in his gaudy suits and NHS-style glasses but his razor wit and success have tickled the fancy of a string of glamorous women since he split from wife Carol and later, Kim. Now curvy blonde pop star Kim has revealed it's the way he tells 'em that counts.
"Looks don't matter to me at all. I just wait to see what comes out of a man's mouth. I need someone with a sense of humour and Chris has plenty," she says. "Actually, I think Chris Evans is good-looking. But I guess I look beyond the physical thing.
"He was very important to me. We've kept in touch but it doesn't necessarily mean we'll be together. However, we're good friends now and that means more to me than anything."

According to Kim's dosest confidante - kid brother Ricky, 33 - there could be more to it. "I hope they'll hit it off again - Chris really gelled with the family. He still adores Kim and she adores him, and they speak regularly so you never know."
For the paparazzi, breakfast show star Chris, 29, made the perfect partnership with much-fancied chart buster Kim. The couple clicked as she guest-hosted The Big Breaktast but their explosive affair ended too quickly in a blaze of flashbulbs. One minute they were canoodling on the TV screen, Chris telling the world he couldn't believe his luck: "We're head over neels in love," he declared. "This is the real thing. We literally can't keep our hands off each other." The next, there were pictures of Chris out partying with ex-model Rachel Tanon-Brown, 26, and talk of Kim red-eyed without him on a skiing holiday with her pals.
They blamed the pressures of work. Chris has since moved from Channel 4 and his other TV hit, Don't Forget Your Toothbrush, back to the airwaves, where they've dubbed him the new Romeo of Radio I. At least five women have been linked with him this year, including Toothbrush assistant Rachel - with whom he nearly bought a house - and ex-Disney Club presenter Andrea Boardman, 27.

Meanwhile Kim, who ditched student toy boy Rupert Kenyon, 25, for Chris, has roared back with a slick, sophisticated, new look. She's been writing and recording. with Ricky and brings out a new album, Now And Forever, tomorrow. Although there have been some dark days since her flrst hit Kids In America made Kim a household name in 1981, a new healthy, restful lifestyle has left her more contented and willing to talk about her feelings than ever before.
"What I really like about Chris is that he's down-to-earth. But our relationship became very public. I've never been comfortable with the public side of my life and being with Chris made it worse. Chris and I are quite alike in that we're very private people. He is quite shy and doesn't like going into a roomful of people and I'm the same. It's okay when you're in front of a camera but with Chris there was a certain craziness about the whole thing which I didn't like. And I was working a lot, too. I'm not a great girlfriend - I'm very independent and don't like having my wings clipped. Anyone would have to take all that on if they stayed with me."
Generally, Kim reckons that she's pretty undemanding. "You have to have a sense of humour to go out with me in the first place, other than that I'm not very fussy about my men!

"The only thing I don't like is when they're into clothes. I don't trust men who spend longer in the bathroom or getting dressed than me. Or if they're fussy about their food - it's a real sign of weakness and the biggest turn-off of all."
Even Chris' mania for cars got the green light. "Men are all like that!" laughs Kim. "Men love cars, women and football and that's it!"
As for Kim, she likes her men young. She met Rupert Kenyon at a ski resort and didn't think twice about him being nearly 10 years younger than her. "It was very refreshing," says Kim, who was born into a showbiz family headed by dad Marty Wilde. "It was no big deal to Rupert that I was famous. He wasn't into status symbols - you could tell that by the way he dressed. We're still friends.
"It's a coincidence that I go for younger men. I've just been hitting it off with them, though a psychologist would see it differently. I've never been out with an older man - I should try it! But age doesn't come into it -it's a man's spirit that matters."
At the moment, though, Kim is happy to be footloose and has shown she can pull through the bad times with or without men, as she did four years ago. She'd worked in the music business since her teens and needed to take stock. "I feel like a chunk of my life was snatched away," she says. "When I turned 30, I came crashing down. I was running on empty emotionally and spiritually but now I have a balance in my life. I do everything more slowly now, And I give myself time on my own."
Kim has the perfect place to do that - her converred barn in Knebworth, Hertfordshire. And she comes trom a loving, supportive family - parents Marty, 56, and Joyce, 55, little brother Marty, 14, and sister Roxanne, 16, Ricky lives 10 minutes away and is always there for her.

"He's my soulmate," says Kim. "He's always the first person I talk things over with. And without him, I wouldn't have as much fun as I do."
She's not kidding. "We were in Germany," recalls Ricky, "and we had a running joke where we'd nibble each other's feet. One night we were in a hotel bar and there was an elderly man there. I dared Kim, so she and the backing singer crawled over to him, pulled his socks off, poured champagne over his toes and nibbled them. I think he enjoyed it!"
And the happily married Ricky has a fair idea of Kim's potential perfect partner. "He wouldn't have to be good-looking - few of her boyfriends have been!" he laughs. "I've objected to a couple of them but have kept my mouth shut until afterwards. "Of course, I get a lot of guys falling over themselves to meet my sister but to put thern off, I tell them she has loads of spots on her bottom!"
"That's typical Ricky!" gasps Kim. "I've spent the last year losing weight, getting fit with the help of a personal trainer and have been trying to make myself look iike a slick and sophisticated woman in control. And now my brother ruins it all by claiming I've got spots on my bum! Just for the record, I deny it completely - and I would love to know how he thinks he knows!" 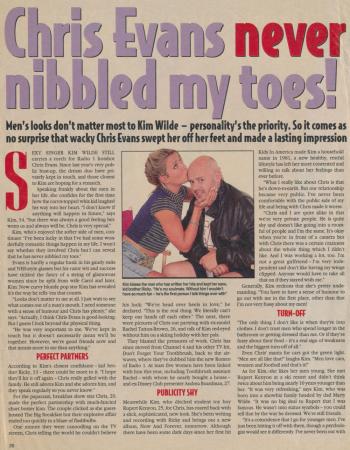 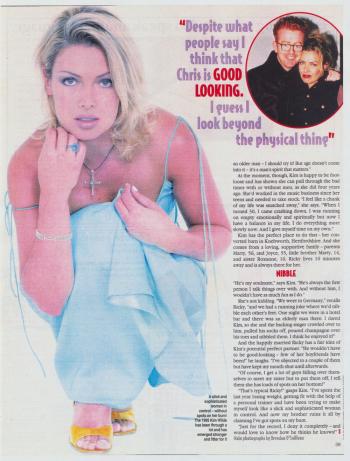