She's thirtyfive now and a lot more woman than teen idol. Kim Wilde recently appeared radiant in the 'Toothbrushshow' and it was obvious once more that time didn't get its claws on her. An openhearted talk about - of course - her civil status, the shadow side of fame and her newest record.

A year ago your post address was in a German magazine with a call to all single men to propose to you. Did you know that?
Oh, dear! What a nice idea. Now I know what I did wrong for all those years.I should have placed a contact ad... No, I didn't know that. But it's typically German. They have always wanted to get me attached to someone. They are obsessed with the fact that I'm single. Although I have to admit it's the same in England. A 35 year old woman who seems to be at ease with the fact that shé unmarried, it doesn't fit with their views of what should be. A woman has to be married and have children at that age.

Did you get stacks of letters?
I would have to ask. I do get marriage proposals regularly anyway. They all get a photo and a signature as an answer.

Obviously a lot of men still like to fantasize about a marriage with Kim Wilde...
Maybe they do. I mean, when I was young I fantasized about being married to Stephen Stills of Crosby, Stills, Nash & Young. It comes with it. But it's a fantasy. And it should remain that way. Although always get fans who think that they really have feelings for you and that it's mutual. They travel around the world to harrass you. It happened to me a couple of times.

Just like that American serial killer who only killed blonde women and had your picture hanging in his room?
I heard about that, yes. A man like that is sick and disturbed anyway. It could have been any celebrity he'd identified with or got obsessed with. It's not the kind of thing I think about for too long. When you're famous you draw attention to you from lots of people. Even people who've got serious mental problems.

Does fame has its scary sides?
Not really. If I was someone like Madonna and lived in America, I would be afraid and maybe I'd always have a bodyguard around to protect me. Every madman carries a gun over there. It would frighten me.

The scariest part about fame is that you can lose it again?
That's certainly true, yes. When I'd just started, that though always went through my mind when I woke up. And that for five, six years in a row. Kids in America, Chequered love and Cambodia were giant hits. It went very well. But still I woke up every morning thinking what I should do when it was all over? After ten years, after I turned thirty, I started to realise that the fame would never really go away. I started enjoying it only then.

Has the success made you rich as well?
I have had a lot of success and I have earned enough money to not have to work anymore. I have never counted it, but it's probably true. It's just not a serious option. I would be bored to death.

Recently you were seen in a toothbrush show. How did you get to do that?
They asked me. It's a popular programme and it was a good opportunity to sing my new single... I was in the English version of that show as well. It's a very new kind of show. I like watching it. It is a little different here and of course I don't understand Dutch, so I don't feel I can say whether it's just as funny over here. A show like that depends on its presenter.

Talking about that: how was Rolf Wouters?
Very nice. I didn't understand his jokes, but I liked doing the sketch with him, in which he operated on a banana and I played a nurse. It's a bit absurd, a little different.

Now & Forever contains soft pop and soul. Does it hurt when people say: I don't like the stuff Kim Wilde does these days?
Yes. If I was confronted with that myself I'd be hurt. I don't like every type of music myself, so I can't expect everyone to think my record is fantastic. But I would ask of people to listen to it well at least once, and then form an opinion of it. It's the most personal record I've ever made. There's a lot of myself in it.

What is the most personal song?
There are a few. They are about feelings I've had and things I've gone through. But I can't say anothing too concrete about that, without talking about my personal feelings too much. I'd like to keep a distance. I'm not Paula Yates.

Paula Yates?
She's married to Bob Geldof and talks about her sexlife with Bob and with Michael Hutchence (INXS) to magazines. For a lot of money. I think it's very distasteful. I would never do that myself. Nover. Not even for the biggest pile of money. Because you're not just talking about yourself, but also about other people. And they get none the wiser.

Finally: your very first hit was Kids in America. Did you hear the punk version of that song by the Toy Dolls?
No, I don't know it. I did hear the one by Lawnmower Deth. They have made a trashmental-version. And there's a horrific version in the movie Clueless. It's really horrible. But I like that the song comes up every now and again. It doesn't surprise me, because it was such an enormous hit. And everyone still likes the song. 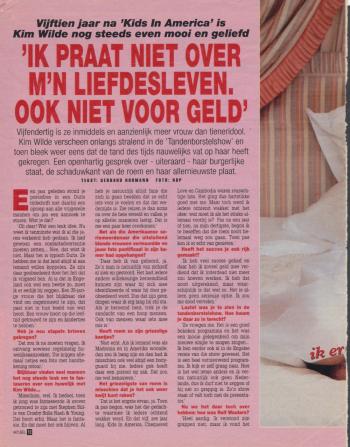 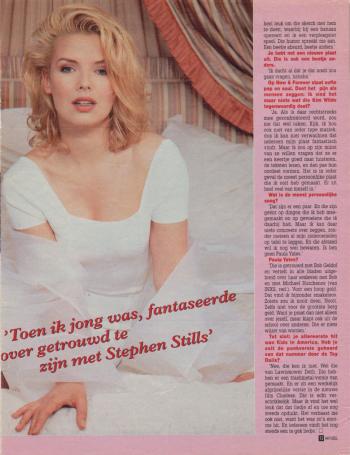